Skip to content
Alert
Alert
Country music legend Charlie Daniels dies at 83 years old
Watch
Watch
FOX31 News at 9:00
This is an archived article and the information in the article may be outdated. Please look at the time stamp on the story to see when it was last updated.

DENVER — The Denver Sheriff Department says 90 deputies who work at the downtown jail will start wearing body-worn cameras in spring 2020.

Currently, surveillance video taken inside the downtown Denver jail contains no audio. If it did, deputies would say the audio proves former inmate Jason Oritz incited a riot with fellow inmates on Oct. 23, 2018.

Surveillance video obtained by the Problem Solvers appears to show Ortiz sitting in the Intake Unit talking to no other inmates when he’s approached by Deputy Jeffrey Steed and allegedly told to stand up and walk to an isolation cell because of Ortiz’s supposedly unruly behavior.

“Next thing I know, I’m getting ripped out of chair, put in a choke hold, can’t breathe and they’re telling me to stop resisting,” said Ortiz.

Again, there is no audio in the video, so it’s difficult to know exactly what was said between Steed and Ortiz. But the video clearly shows that after about 10 seconds of conversation, Steed grabs Ortiz around his neck and with the help of other deputies, drags Ortiz into an isolation cell where there are no cameras. 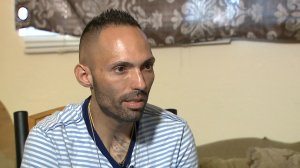 The 34-year-old Ortiz was in jail on drug charges. He admitted he has a criminal past but insisted the video shows in this case, he was the victim.

“For one time in my life, I didn’t do something and I got completely assaulted by the police (deputies) for nothing,” he said.

Ortiz said the internal affairs investigation into his case was a whitewash and says body cameras would have proved it.

In the case of Ortiz, what happened was largely his word versus deputies’, though surveillance video contradicts Steed’s version of events in which he told investigators, “Inmate Ortiz stood up very fast in an attempt to fight him and he (Steed) reached around him (Ortiz) with his left arm to attempt to pull him close to him for better control.”

Video shows Ortiz did not stand up or take a swing at Steed, instead it is Steed who lifts Ortiz up out of his chair.

Yet Ortiz would soon be charged with four counts of assaulting a deputy, which given his criminal history, could have meant decades in prison had he been convicted.

The Denver District Attorney’s Office dismissed the charges against Ortiz. A memo obtained by the Problem Solvers shows an assistant prosecutor wrote, “A reasonable juror could find this to be unauthorized use of a choke hold” after watching the surveillance video. 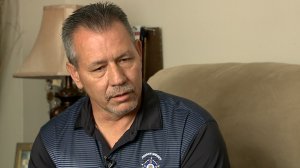 “Choke holds are not allowed in the department,” said Michael Britton, vice president of the sheriff’s union.

Britton recently retired from the department and agreed to watch the video for FOX31. When asked if he saw anything in the video that suggest inmate Ortiz was trying to incite a riot, he responded, “No, I didn’t see anybody else get aroused. But then again, there was no audio that would better tell the story.”

Britton said the sheriff’s union supports the introduction of body cameras both for the protection of inmates and deputies.

“It would have either validated Deputy Steed or it wouldn’t have,” he said.

The internal affairs summary obtained by FOX31 acknowledged that, “In the video recording of the incident, it appeared that Deputy Steed used a choke hold or a headlock to restrain Inmate Ortiz.”

But the Denver sheriff major who wrote the report excused  Steed’s conduct, writing, “It is important to point that Deputy Steed is not deemed to have used unreasonable force simply because it might be later determined that he was mistaken in his belief that Inmate Ortiz was going to strike him.”

In April 2019, Denver Mayor Michael Hancock introduced a new Public Integrity Division to place investigations into the conduct of sheriff employees under civilian control. Now, such such investigations are overseen by the Administrative Investigations Unit, led by David Walcher, the former sheriff of Arapahoe  County.

“Body cams will be very helpful In the future,” said Walcher, who noted his unit is independent of the Denver Sheriff Department. “On that particular case, body worn cameras may or may not have made a difference.”

Walcher notes that because surveillance cameras are stationary and contain no audio, they end up not being nearly as helpful as body cameras will be.

“The audio that we can get and receive is critical because you’re actually hearing what is going on,” said Walcher, before adding, “You’re hearing what a particular inmate is saying and maybe it’s threats or whatever it may be but then you’re also hearing what the deputies are saying and you’re hearing the commands that they’re giving.” 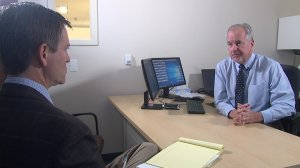 Walcher watched the video in the case of inmate Ortiz and told the Problem Solvers he doubts the case would’ve had a different outcome had body cameras existed.

“I can look back at the video and see why the deputy made the decision that he did and use force like he did,” Walcher said.

But Ortiz told FOX31 he has no doubt body cameras would have ensured he never faced criminal charges to begin with.

“I don’t understand how any of that happened — how I was even originally charged. They should’ve been bringing me a Big Mac and a milkshake and like, ‘Hey man, I’m sorry’,” Ortiz said.

Steed was convicted of misdemeanor assault on an inmate in 2000. He received a deferred sentence and was allowed to continue working as a deputy.

DENVER (KDVR) - A Denver Deputy has been fired for his role in a drag-racing incident on I-25 near Castle Rock in Mid-January. Deputy Jason Martinez was terminated June 30, according to a disciplinary document obtained by the Problem Solvers.

Martinez was in the passenger seat in a transport van being driven by fellow deputy James Grimes. The two deputies were transporting three inmates from the Bent County Jail to the Denver Jail when a Colorado State Police airplane spotted the van going 100 miles an hour in a construction zone where the post speed limit was 60 mph.

Man admits to setting multiple fires after arrest in Boulder

Colorado’s Emergency Operation Center distributed thousands of masks and face shields and over 1,700 vials of Remdesivir in June