BOULDER, Colo. — A Boulder police officer accused of excessive force before now faces a lawsuit for an incident not previously reported.

Kelly Clark, 41, is suing Officer Waylon Lolotai, the city of Boulder and the Boulder Police Department for an interaction caught on Lolotai’s body cam and witness cellphone video on July 15, 2018.

“He shoves her into the air and she goes flying. It was shocking” said Adam Frank, the attorney representing Clark.

Frank says Boulder should have never hired Lolotai in the first place, given his history as a Denver Sheriff’s deputy. Lolotai was seen on detention center surveillance video shoving an inmate backward on steps on December 8, 2014. Lolotai was placed under investigation along with a “no inmate contact” restriction for nearly 18 months before resigning on June 2, 2016.

Two weeks earlier, on May 19, 2016, Lolotai’s attorney Zach Wagner was recorded at a contemplation of discipline hearing saying “We’re here today because he’s been disciplined for violation of rule and regulation 300.22: Inappropriate Use of Force.”

“Boulder knew all of that and said, ‘That’s the guy we want policing Boulder.’ Boulder is ultimately responsible for the absolute natural consequence of hiring a bad cop,” said Frank, who filed his case in federal court. 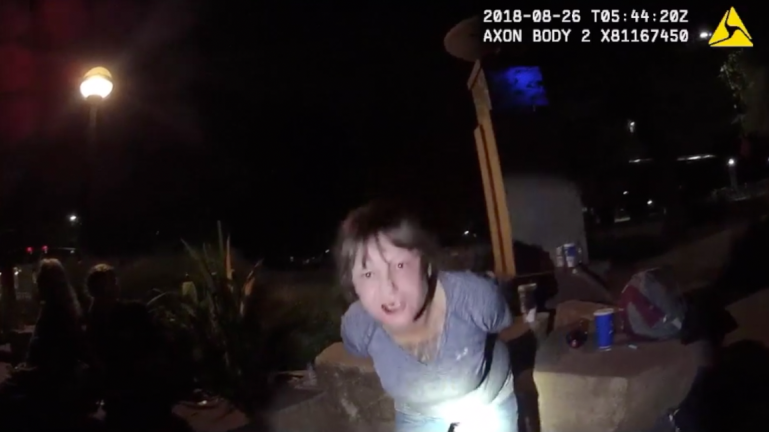 Clark is seen on witness video watching four Boulder police officers arrest a man on the ground when Lolotai stands up and yells, “Step back, step back, stay away from us, stay away form us,” before pushing Clark airborne backward.

“I mean, Lolotai shoved her for 3 inches to the side and she would’ve slammed straight into that light post,” said Frank.

Lolotai has been accused of heavy-handed tactics before. In August 2018, he arrested a homeless woman named Michele Rodriguez for obstructing a peace officer after she tried to call 911 to get a police supervisor to the scene where she was being questioned by Lolotai and another officer.

After Rodriguez reached for her cellphone, Lolotai can be seen on body cam arresting her while Rodriguez screams, “You are abusing your power. Your cameras working tonight?”

Just two days ago, a Boulder jury acquitted Rodriguez of all wrong-doing.

Lolotai is also accused of being too aggressive when he arrested Sammie Lawrence on April 5, 2018.  The 26-year-old was videotaping Lolotai with his cellphone because he felt Lolotai was harassing homeless people for no reason. Soon, Lolotai would turn his attention to Lawrence, telling him to drop his walking aide, a stick that Lawrence said he uses because of his history of seizures.

On the cellphone footage, one can hear Lawrence say, “you’re harassing me, sir. Get off of me. This is my walking aide. You took my walking aide,” as Lawrence falls to the ground.

Lawrence was arrested for obstructing a peace officer. His case has yet to go to trial.

Frank said Lolotai has a patter of aggressive behavior and Boulder police should have known not to hire him.

Boulder police tell FOX31 it stands by its decision to hire Lolotai and add he’s never been under any internal affairs investigation since he joined Boulder police in July 2016.

In an email, Lolotai’s wife, Melissa Lolotai tells the Problem Solvers her husband did not quit the Denver Sheriff Department to avoid discipline; he quit because of “a toxic environment created by Command Staff” and that he “Only uses force when necessary.”