DENVER — The Denver Public Schools district, under court order to provide extra English classes to tens of thousands of struggling students, can’t get it done.

In 2012, a federal judge ordered DPS to have students with low English language scores sign them up for at least one, daily, 45-minute specialized class to help them catch up.

After months of fighting with DPS over internal tracking records, the district is still faltering, especially at high schools and public charter schools.

The Civil Rights division of the U.S. Justice Department has repeatedly warned the district that every one of those struggling students needs to be enrolled in the English Language Acquisition Program.

However, progress reports maintained in the DPS computer tracking system show many of those low English language scoring students were never enrolled in that mandated special class.

At George Washington High School, of the 143 students that so badly need that help, the district only enrolled 36 of them, about 25 percent of the mandate.

At Abraham Lincoln High School, 545 English-second-language students should have received help, but only 299 did.

The data show similar failures at other high schools where hundreds more students were let down by the district.

And these records are from April, toward the end of the school year. Data showed in previous months, the percentage of students not being scheduled for special classes was even worse. 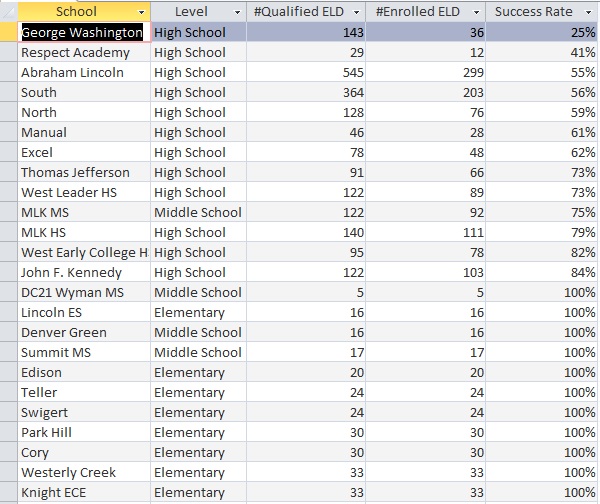 “We have an obligation, not just a moral obligation, but a legal obligation to make sure they are receiving all the services they need,” said chief schools officer anf former interim superintendent Susana Cordova said. “That’s something we take very seriously.”

Cordova said DPS still struggles to find the right number of bilingual teachers and multilanguage tutors. The district said it deals with students who speak up to 180 languages, although Spanish is by far the most prominent.

“We’ve made tremendous progress,” Cordova said. “But we’re still not at the point we know we’re doing everything exactly the way it needs to be.”

Monthly reports vary, but DPS’ internal records show that in October 2015, 2,720 qualifying students were not assigned their special English-language class; and that does not include thousands of charter school students.

The tracking system shows only five of the 110 KIPP Montbello Middle School students who needed English Language Development classes were enrolled last year. At Rocky Mountain Prep Elementary, the computer only shows 12 of 235 qualifying students getting the class.

DPS is adamant that charter school ELD enrollment numbers are likely much better than they appear.

“Since many charter schools do not use (Infinite Campus; the computerized data reporting system) we can’t report their scheduling data accurately or comprehensively,” DPS said in an email.

The district allegedly tracks students at some charter schools with a pen and paper.

The Problem Solvers asked for access to those handwritten records to verify the district’s position, but they have not been received.

“It’s a very minimum requirement. It’s not something that should be that difficult to comply with,” former DPS board member Arturo Jimenez said.

Jimenez said the reason DPS can’t hire the right number of qualified ELD teachers or follow the court orders, in his opinion, is that the district chooses to spend tax money on other things.

“There are at least 2,000 students who are struggling. Who are overage and under credit and who need those English language transition classes,” Jimenez said.

“We’re about to send them out into the world, but they are just absolutely not prepared due to the failure of the Denver Public Schools to implement this consent decree.”

The consent decree is related to a successful lawsuit against DPS filed decades ago by the Congress of Hispanic Educators. The basis of the lawsuit was DPS needed to provide an equal educational experience for all students, even those who did not speak English as a primary language in their homes.

U.S. District Judge Richard Matsch assigned a court-appointed independent monitor to report back to him regarding ELA programs.

That monitor, Paul Martinez of Fairview, N.M., declined to review the data that was acquired as well as records provided from the district after a prolonged fight.

“As the Independent Monitor, it is not appropriate for me to be interviewed on subjects that might come before the court at some point,” Martinez said. “Therefore, I am unable to discuss the topic you reference below.”

Sign up to be part of the English Language Acquisition Program Parent Advisory Committee. Check your school’s newsletter for ELA-PAC meeting schedules.

Office of Family and Community Engagement: This organization has made 9,000 home visits with students, teachers, tutors and interpreters to help bridge gaps in educational services.

Colorado African Organization: Nonprofit advocates advancing the cause of integration by fostering education, self-sufficiency and empowerment for all refugees, asylum seekers and immigrants. Organizers have interpretive services in 21 languages.

DENVER (KDVR) -- A man died after being struck by a vehicle in southwest Denver late Friday night.

Police said they received a call about a pedestrian being hit by a vehicle near S. Federal Boulevard and W. Jewell Avenue just before 11 p.m. and that a man was transported to the hospital with serious injuries.

Removal of destroyed Marshall Fire homes could begin in February