COLORADO SPRINGS, Colo. — Rick Raemisch, the executive director  for the Colorado Department of Corrections, has been verbally reprimanded for using a state vehicle to go elk hunting in October.

A five-page letter was written by the inspector general for the Department of Corrections that investigated Raemisch’s conduct.

The letter is heavily redacted. The first two paragraphs in the “finding of fact” are blacked out.

But the letter references use of a state vehicle during a hunting trip.

“According to many team members, the odor is now unbearable due to the blood and carnage that was allowed to seep into the carpet and recess of the cargo area.”

The letter goes on to mention damage that occurred to the state vehicle during the hunting trip.

“(Raemisch) backed off the boulder, but caused damage to the vehicle, which his protection team lieutenant later attempted to fix with gorilla glue.” 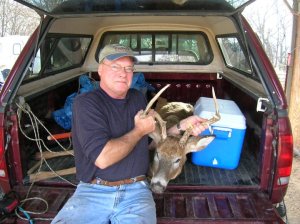 A photo of Raemisch is on his Facebook page from a hunting trip he apparently took in 2010, but a public records request for photos of the state vehicle used in the private hunting trip were denied by the Colorado Department of Corrections.

In an email, officials said providing the photos would be “contrary to the public interest pursuant to 24-72-305(5). Release of this information could reasonably compromise the safety/security of an individual or individuals.”

Colorado Gov. John Hickenlooper appointed Raemisch to the position in June 2013, three months after then-director Tom Clements was assassinated in his home by a former inmate.

As a result of the Clements assassination, the state assigned a security team to provide Raemisch and his family around-the-clock protection.

Raemisch would not consent to an interview, but through a spokesman, he acknowledged going on a hunting trip in the Rockies with two members of his detail.

Raemisch insisted he did not expect his detail to conduct any actions during the trip except to ensure his safety.

A spokesman for Raemisch said the detail team followed Raemisch to a safe location and then departed.

That account runs counter to what whistleblowers inside the Department of Corrections supposedly told former Colorado U.S. Rep. Tom Tancredo.

“They told me that indeed he used his security for that purpose … for spotting elk or hunting with him,” Tancredo said.

“The whole thing is this: Would another state employee, if they did that, what would be the outcome? Would they simply get a little tap on the hand?”

“Executive Director Raemischs’ use of state vehicles is and has been within the guidelines set forth by his security protocol,” the Department of Corrections said in a statement.

“In order to maintain the integrity of the executive protection unit, the department is unable to provide specific details.”

“We took the issues raised regarding Mr. Raemisch’s use of the state vehicle very seriously and referred them to the Inspector General for investigation,” the governor’s office said in a statement.

“We have followed the Inspector General’s recommendations upon his review of the concerns.  We feel this matter has been satisfactorily resolved.

“We emphasize that our policies governing Director Raemisch’s use of state vehicles and other security arrangements are designed to address the unique risks posed to his safety as executive director of the Department of Corrections.”

At the conclusion of the investigation, Raemisch met with Inspector General Jay Kirby and the governor’s chief legal counsel Jacki Copper Melmed to clarify the use of state vehicles for private purposes.

Kirby is an at-will employee who was hired by Raemisch, so he was in effect asked by the governor’s office to investigate his boss.

Anonymous employees at the Department of Corrections have said they felt it was inappropriate to ask the inspector general to conduct an impartial investigation of his boss and as a result, weren’t surprised that Raemisch received no punishment.

Tancredo said he felt Raemisch should have been fired by the governor.

“You can’t let this go on, really and truly,” he said.

The governor’s spokeswoman was asked why an outside agency such as the attorney general wasn’t asked to investigate.

She said the governor felt the investigation was complete and fair and had no concern it wouldn’t be independent.