GOLDEN, Colo. — Jenell Mejia dreads opening her own mail. For the past six months, she’s been inundated by unpleasant surprises: overdue bills, court summonses, threats to suspend her driver license and letters from various government agencies, including criminal prosecutors.

Her name is on the documents, but the rest of the contents are entirely unfamiliar.

Mejia is a victim of identity theft and fraud, one of the most common crimes in Colorado. In fact, she’s the perfect victim: she has good credit and no criminal record.

Mejia had her identification stolen during a car break-in two years ago. Then, last August, Mejia received a call from Lakewood police.

They had arrested a woman at the Colorado Mills Mall who said her name was Jenell Mejia. According to the police report reviewed by FOX31, the accused shoplifter even verbally gave an officer Mejia’s correct date of birth.

Mall security inside the Calvin Klein store had spotted a woman “selecting items and placing them into her brown purse.”

Records show that when confronted, the suspect tried “running” and “continued to struggle” while a uniformed Lakewood officer put handcuffs on her.

Mejia’s phone rang. It was a police officer.

“She asked, ‘Are you Jenell?’ I said, ‘Yes.’ ‘We have someone here who was caught shoplifting and trying to use your name. They misspelled it. That’s when I decided to look up in the system and saw it was not you.'” Mejia told FOX31.

Mejia went down to the mall and reviewed security footage of the shoplifter and didn’t recognize her.

At the jail, the shoplifter’s story came apart once fingerprints revealed her true identity.

Garcia’s Colorado Bureau of Investigations crime sheet shows she’s been charged with at least 80 various crimes and offenses over the years.

“I’m not related. I don’t know who this person is!” Mejia told the FOX31 Problem Solvers. “I’m obviously not the one who did anything. I’m just out to protecting myself because I’m not going to take fault for something I didn’t do and I’m sure as hell not going to let someone do that to me. I’m going to go until I get my name cleared.”

But getting her name cleared has been a nightmare.  The accused criminal’s police stops have started getting mixed up with the records of the innocent victim.

FOX31 discovered Garcia was pulled over by Denver police for speeding after posting bond on the Colorado Mills Mall incident. However, Mejia is the one who received the ticket because Denver detectives now believe Garcia lied to the traffic officer while impersonating Mejia. That realization didn’t occur until after a judge ordered Mejia into court and the Division of Motor Vehicles issued a suspension of license notice to Mejia for not showing up to pay “her” speeding fine.

And around Thanksgiving, Garcia was arrested by Lone Tree police – again for alleged shoplifting. 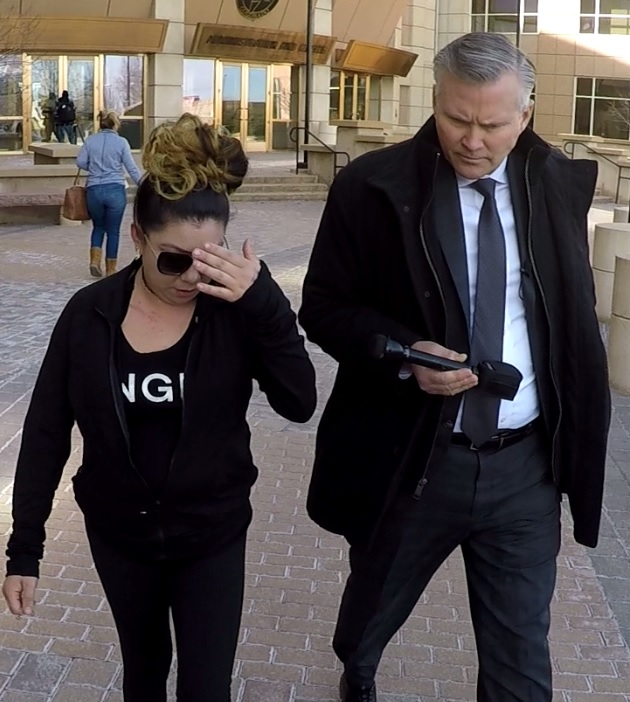 Garcia had Mejia’s ID card in her pocket.

Garcia showed up in Jefferson County court earlier this week for a criminal arraignment. Afterwards, the FOX31 Problem Solvers approached her to ask about her pretending to be Mejia when stopped by police.

FOX31: “When you get stopped by police and pretend to be somebody else, it’s a really serious accusation.”

Garcia: “It’s not. It’s not ‘cause I never got stopped by police, so I don’t know what to tell you.”

FOX31: “You were pretending to be somebody else?”

FOX31: “You know, it hurts this other person’s reputation for you to do that.”

If you need help dealing with an identify theft, the Colorado Bureau of Investigation’s identity theft and fraud/cyber crime unit can help. Email CBI.StopIDTheft@state.co.us or call the 24-hour ID Theft Hotline: 1-855-443-3489.

DOUGLAS COUNTY, Colo. (KDVR) -- Former Douglas County School District Superintendent Thomas Tucker was placed on leave days before his resignation due to accusations of "improper conduct," according to a letter sent to Tucker from School Board President David Ray.

“This paid administrative leave is not disciplinary in nature but is for the purpose of protecting your rights as well as the interests of the district during the investigative period,” Ray's letter states.

DENVER (KDVR) — As fall and winter approach, health officials are bracing for more indoor gatherings that will increase the risk of spreading the novel coronavirus. Indoor dining is considered risky, but transmission can be avoided if proper precautions are taken, according to UCHealth experts.

Specific air heating and cooling system filters can help limit the amount of virus particles in the air. A certain type of filter is currently in high demand, according to Major Heating and Air Conditioning in Wheat Ridge.

La Niña arrives in Colorado; Here’s what it means for snowfall this winter