AURORA, Colo. — Despite widespread support for a popular teacher, the Cherry Creek School District Board voted Monday night to acknowledge the receipt of a recommendation to terminate Overland High School teacher Jay Bennish.

The unanimous vote means the matter will now go to an independent hearing officer hired by the school district.

At the hearing, Bennish will be allowed to present his own witnesses. Then, the hearing officer will make a recommendation and the board will decide whether it wants to fire Bennish.

Bennish has been on paid suspension since Aug. 27. In a letter sent to parents in mid-January, the district accused Bennish of improper conduct and possible inappropriate use of the N-word.

A social studies teacher for 20 years and long-time adviser to the Black Student Alliance, Bennish says he was suspended after two female African-American students asked him for permission to use the N-word at student events. Bennish said no, insisting to do would violate district policy.

Dozens of people packed the school board meeting Monday night, in spite of a snowstorm outside, to voice support for Bennish and to criticize the district’s handling of the matter.

During the public comment portion of the meeting, one parent told board members, Bennish “Does not have a racist bone in his body.”

Another teacher said he witnessed the exchange between Bennish and the two students that led to Bennish’s termination, and said the 42-year-old teacher was professional and appropriate yet, “No investigator ever asked me for my statement on this event. I was never interviewed or consulted about what I saw or heard.”

One African American student, in praising Bennish as a teacher, said, “I hate to admit it but I was ignorant and oblivious to my own culture much like this district still is,” which led to a roomful of clapping. 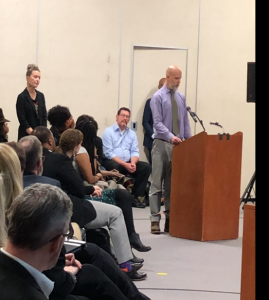 Bennish himself told board members, “I implore you to do your due diligence and review the entire body of evidence and reinstate me.”

A standing ovation followed his remarks.

Bennish spoke to the Problem Solvers in an exclusive follow-up interview on Tuesday.

“It meant everything. I can’t thank you enough. To all of the students, parents, community members and family that came out to represent and stand up for me, it was very powerful,” he said.

Bennish and his legal team told FOX31 that if he’s not re-instated, they will sue the Cherry Creek School District in federal court.

THORNTON, Colo. (KDVR) -- A mid-June fire at a Thornton apartment building left damage on three floors. Now, residents have turned to the FOX31 Problem Solvers for help in having repairs made. The residents say the fixes are long overdue.

BOULDER, Colo. (KDVR) -- When Justin Bannan pleaded not guilty by reason of insanity at his arraignment on Thursday, it came nearly 10 months after he was charged with attempted murder.

The 41-year-old former Denver Bronco has won multiple delays in his criminal case, in which he also faces counts of first-degree assault and first-degree burglary for allegedly shooting Ashley Marie in the shoulder.

CENTENNIAL, Colo. (KDVR) – Paramedics at South Metro Fire Rescue followed protocol when they administered ketamine to an intoxicated man who ended up hospitalized and on a ventilator last summer, according to the agency’s self-review of the incident.

“Based on this thorough and in-depth review of this incident, SMFR has determined that protocol was followed regarding the administration of ketamine,” Eric Hurst, the SMFR public information officer, said in a written statement.