Before March 1, owners of security alarms faced no penalty for falsely summoning police.

Only a month into the new program, which fines false alarm violators up to $450, the Boulder Police Department said officers have seen a “dramatic” reduction.

The worst violator was the online customer service center for the athletic shoe and clothing company Finish Line at 1881 Ninth St.

According to police records, employees at Finish Line falsely set off the building’s alarm system at least 47 times in two years.

Police policy is to send two officers to an alarm call and it’s usually dispatched as a priority.

“We continuously work to educate our employees on safety and our surroundings including the activation and deactivation of our building alarm security system,” Finish Line spokeswoman Dianna Boyce said.

“We also work diligently with the alarm company to ensure we have the latest technology and up-to-date procedural information. We are a proud member of the Boulder community and value our public safety officials and their time as well as how they serve us.”

The thousands of unnecessary alarms cost the offending businesses nothing. Taxpayers lost an estimated $300,000 in wasted police time.

“We’ve reviewed the alarms over the past year and determined that the majority were due to errors by team members in disarming our system,” spokeswoman Cristie Drumm said in a statement. “We’ve reviewed procedures with our team to limit unnecessary alarms in the future.

The manager of clothier Athleta on Pearl Street at first said she couldn’t answer for the 21 false alarms at the store, saying only the corporate office speaks with the media.

The she later said, “It’s the motion sensor for our back door. The leaves fly underneath it.” 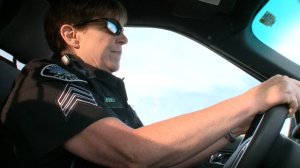 Boulder police Sgt. Melissa Carey said wasted tax money and police resources are concerning, but for officers, there is a more serious matter that repeated false alarms cause: Rolling up on a potential active burglary scene but thinking it’s another false call.

“That’s kind of the problem,” she said. “You can’t ever get complacent in this job, so you have to treat every one like it’s legitimate, so we do.

“But I’m sure there are some officers who think, ‘Oh, it’s just X-Y-Z place again.’ But really you can’t just pretend it’s going to be fake, because it could be that time it’s a real alarm, which is why we send two officers to these kinds of things, you just don’t know for sure.”

Employees at Mountain Sun Pub messed up the alarm system at least 16 times in two years. The manager said he received a letter from the city informing the business about the new fine structure for false alarms.

He admitted there had been a problem, but vowed to address it with his workers.

“Yeah. It’s usually an employee going into an office where there’s an alarm set and (I’m) not there and they don’t have the code and can’t unset it,” Justin said.

“We’re very small and hold a lot of product in areas where we have alarms, so we’ll just have to go up there ourselves and unlocking the doors.”

The Lazy Dog Pub recorded 16 false alarms. A representative said he was aware the business had racked a number of security alarm mistakes.

Gabrielle was surprised to learn about the new fines, which would cost the owners up to $450 for the first four. According to the ordinance, police could stop responding to alarms after a fifth false call annually.

“Wow, that’s really something,” Gabrielle said. “I didn’t know that was going to happen. First time I heard about this. It’s not going to be me that’s getting fined.

“I’m pretty sure the owner is not going to be happy getting fined all the time, so most definitely the owner needs to do something about it. Training — that’d be the way to go.”

Carey said that is the reaction the city was hoping for.

“There was no incentive for them to fix their alarm system so now with the new policy, they have some incentive, some financial incentive to get it taken care of,” Carey said.

LAKEWOOD, Colo. (KDVR) -- At Chili Shack on Colfax, a customer Friday afternoon was hungry for more than a burrito.

Footage obtained only by the FOX31 Problem Solvers catches a brazen man in action taking his food and a full donation jar to go.

DENVER (KDVR) -- One in three people on prescription drugs in Colorado is struggling to pay for them, according to estimates from the Colorado Consumer Health Initiative. That's part of the reason why the governor is supporting an effort at the capitol to keep medicine affordable.

"We know, Americans know, we are sick and tired of being ripped off on this," Governor Jared Polis said at a press conference Monday.

DENVER (KDVR) — Despite a lack of inventory and sky-high prices, second-home sales in Colorado are soaring.

According to a national survey highlighted by the Colorado Association of Realtors, second-home sales jumped up by 44% in 2020.