Skip to content
Watch
Watch
FOX31 News at 10:00
This is an archived article and the information in the article may be outdated. Please look at the time stamp on the story to see when it was last updated.

AURORA, Colo. — Nancy Daoust came to Aurora Municipal Court Monday morning to face a trespassing summons. But the 60-year-old honestly had no idea where she was or why.

“The fact that this is quote unquote being treated as a criminal matter is very frustrating. You know, I have to lose a day of work,” said Nancy’s husband James Daoust, who calls her ticket for trespassing a lack of compassion and common sense. 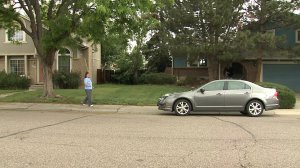 Daoust says his wife was diagnosed with advanced frontal temporal dementia at the age of 58. Her condition has deteriorated to the point she’s no longer capable of talking but she does like to wander on walks. That’s what led to her municipal summons.

“She rang a doorbell and walked away, literally. Is it an inconvenience and a nuisance? Sure. But it’s not a crime and it’s being treated as such,” said Daoust, explaining how his wife was cited for ringing the doorbell of a neighbor, who lives about six houses away from their home in Aurora.

FOX31 investigative reporter Rob Low paid a visit to the neighbor who called police but the neighbor wouldn’t come to the door. Instead, his wife said, “He declines to  come out, he doesn’t want to talk.” 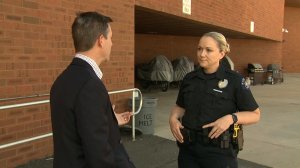 Aurora Police Department spokeswoman Crystal McCoy told the Problem Solvers the officer who wrote the ticket is sympathetic to Nancy Daoust’s diagnosis of dementia but said the officer had no choice.

“When a property owner wants a law enforced on their property, this is not an area that we have discretion in,” McCoy said. 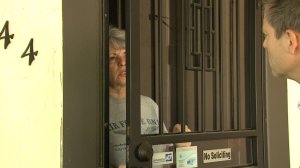 “I mean she (Nancy) clearly has a disease. It chose her, she didn’t choose it. Like I said to the judge, there’s no way she’s even remotely competent to stand trial,” said James Daoust.

James told the Problem Solvers he normally walks with his wife but on May 16, the day she was ticketed, she managed to escape the house.

“This particular day, she was laying on the couch, so I went to the bathroom. When I came out, she was gone. I went to get her and apparently she had already rang his doorbell,” James said. 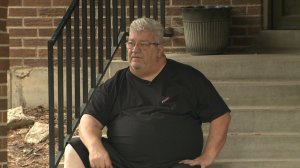 The 63-year-old Comcast employee said his employer and most of his neighbors have shown nothing but compassion and understanding, with the exception of the one neighbor who called police.

“It’s a disease, it’s not a crime. And to treat it as such is pretty self-righteous, to say the least,” said James. “If it happens every five weeks and that’s the worst thing that happens to him, then his life has been pretty  good.” 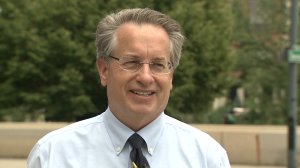 “What we’d like to do is see law enforcement understand the circumstance and if they knew this woman had dementia, maybe treat it differently,” said Jim Herlihy, who is the director of communications for the Alzheimer’s Association of Colorado.

“There’s really nothing to be gained because she will have no memory of why she’s there,” Herlihy said.

If you have a loved one who might benefit from the resources of the Alzheimer’s Association of Colorado, you can call them at 1-800-272-3900 or visit their website.

Restaurants opening for dine-in share advice with other owners