AURORA, Colo. — A 3.5-year-old pet dog is likely to be euthanized after a judge reversed himself Monday morning and ordered “Blue” be surrendered to the Aurora Animal Services Division.

The dog had been held at the Aurora Animal Shelter since Dec. 13.  On Friday, the same judge, Bob FitzGerald, ordered the dog be released to his owner, Tracey Prim.

As part of the judge’s order, Prim was to put a muzzle on her dog when she arrived to pick him up.

But the muzzle slipped off after her first try and she wasn’t able to successfully put the muzzle back on the dog within five minutes before an animal protection officer ordered her to stop trying.

Aurora Animal Services filed an appeal Friday afternoon asking Judge FitzGerald to reconsider his “Order of Release” because animal protection officers considered the dog vicious, testifying it would snap at its handler when Prim or her brother attempted to muzzle the dog.

“What do they expect just because in five minutes we can’t put the muzzle on, we don’t know how to tame or control our dog? That’s ridiculous,” said Prim, who insisted her dog wasn’t growling but was feeling anxious after being in the shelter for 3 weeks.

Prim told FOX31 she was not allowed to visit her dog the entire time and felt Aurora Animal Services basically dog-napped “Blue” on Dec. 13, when she took the shelter up on its offer to neuter him for free. 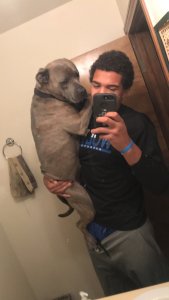 “I don’t even know how to explain my words of rage and upset, and being hurt. Those people at the animal shelter, those are vicious people, they lie, they’re backstabbing, they’re conniving,” complained Prim.

The two dogs began fighting.  When the adult female next-door neighbor tried to grab her dog back, she was bitten on the hand by Blue.

Blue was placed in quarantine at the Aurora Animal Shelter but given back to Prim on Nov. 19 when DNA test results proved Blue is not a Pit bull and therefore not banned in the city of Aurora.

In Aurora, any dog that tests at least 50 percent pit bull is banned. 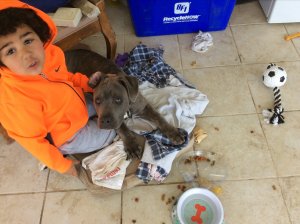 She said the dog has never been aggressive with her young son.

Prim said her mistake was believing Aurora Animals Services had good intentions when it offered her free neutering if she brought her dog back.

“I wish I had never taken him back because if I didn’t take him back then he wouldn’t be in this situation right now,” said Prim before adding, “I would still have my dog.”

But Animal Protection Officers told Judge FitzGerald the dog was aggressive when he was brought in to be neutered and especially when his owner tried to place a muzzle on him Jan. 4.

As a result Judge FitzGerald changed his mind at the appeal hearing on Jan. 7 and ordered Blue to be permanently surrendered to Aurora Animal Services.

No one from Aurora Animal Services would talk to FOX31 on camera but in an email a city spokesman told the Problem Solvers:

“Animal Services staff will assess the dog’s behavioral and health history and kennel behavior in determining how to proceed. That determination is likely to be made this week.

Because the owner still faces two counts of keeping an aggressive or dangerous animal based on incidents in November and December, which are separate court proceedings from today’s hearing, Aurora Animal Services cannot comment further on the details of the case.”

That same spokesperson told FOX31 the reality is the dog will likely be euthanized but he could not say when.

Prim is due back in court Feb. 15 on the charge of possessing an “aggressive or dangerous animal.”

PITKIN COUNTY, Colo. (KDVR) -- The body of a 41-year-old kayaker was found near the "Meatgrinder" rapid on Crystal River on Saturday afternoon.

The Pitkin County Regional Emergency Dispatch Center was notified by the Carbondale and Rural Fire Protection District around 3:30 p.m. that the man's body had been found.

DENVER (KDVR) -- A Cherry Creek High School senior has just two business days left to try and get a new passport so she can go on her senior trip with her friends.

“With COVID we didn’t really get a senior year,” Audrey Pallai, who just graduated from Cherry Creek High said.

DENVER (KDVR) -- Denver police are searching for a suspect involved in a two-vehicle hit-and-run crash that seriously injured a woman on Saturday.

A Medina Alert was issued for a 2005 black Ford pickup with Colorado plate 338-PAK. The truck was last seen traveling westbound on 5th Avenue from Knox Court. The vehicle may have significant damage to the driver's side front.

President Biden’s dog, Champ, passes away: ‘We love our sweet, good boy and will miss him always’

A 3rd vaccinated Coloradan is now a millionaire