Most Wednesdays, thousands of livestock arrive to be sold to the highest bidder. Some sellers show up in a beat-up pickup truck with a single lamb or goat in the bed; other livestock, including pigs, cattle and horses arrive in semitrailers by the dozens, packed flank to flank.

According to the operation’s assigned veterinarian, Centennial is known as a “kill auction” — the last stop for nearly all of the animals before being purchased in the auction ring and transported back off the lot to slaughter.

A few lucky horses are bought by animal rescue groups in an attempt to give them a nonlethal retirement. But for most of the other livestock, they are living out their final days in the Centennial barnyards. 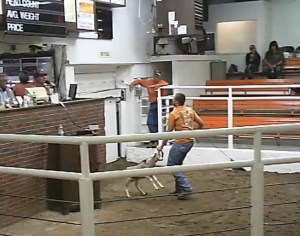 It is those final days of life that a FOX31 Denver undercover investigation focused on, raising the question: While the animals are on the lots awaiting sale and afterward heading into a trailer to go elsewhere, how much suffering and neglect should be allowed, if any?

For example, FOX31 Denver captured video of a lamb being sold at Centennial this summer. 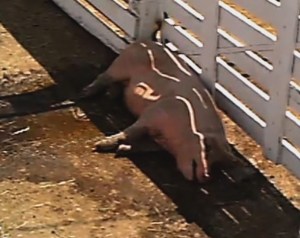 It was swatted into the auction ring with one of its legs dangling, damaged badly enough that it could not bear weight on it. Auctioneers moved it through the ring on the other three legs and sold it anyway.

Another day, a large pig laid with labored breathing in 91-degree heat for at least five hours while FOX31 Problem Solvers monitored the pens. The pig wasn’t well enough to rise off the ground during that time, even after being kicked.

On another hot afternoon, a sheep didn’t make it through the day, lying dead in a pen until a bobcat hauled its carcass away.

FOX31 Denver launched an investigation after getting complaints from viewers regarding the welfare of animals at Centennial Livestock Auction.

One of the witnesses, who asked to remain nameless because of an association with Centennial, said, “I’ve seen them sell a goat with a broken leg that happened in the pen at the auction. I have seen horses in horrible condition.  I’ve seen actively calving cows go through the ring and goat kids still wet from kidding.”

We shared some of our findings and video with Aubyn Royall, the Colorado state director of the Humane Society of the United States.

“It would be hard to deny that animal was suffering,” she said. “At the very least, the animal is suffering from discomfort and at the most the animal is in pain or is injured. … Any animal that is too injured should not be sold, so moving an injured animal through and selling it on the auction floor should not be done.”

That statement isn’t just her philosophical opinion, but is rooted in Colorado law. But FOX31 Problem Solvers found a widespread lack of animal welfare inspection and oversight at the state and federal levels.

The care of the animals while at Centennial is on the shoulders of Assistant Deputy State Veterinarian Dr. John “Jack” White. He was listed as staff on the Centennial website until we started asking questions about the operation, then we found his picture and profile were removed.

The FOX31 Problem Solvers spent the large part of five days at Centennial Auctions watching and videotaping. White was rarely seen outside inspecting animals even though a state law reads:

35-55-113: ALL LIVESTOCK CONSIGNED AND DELIVERED ON THE PREMISES OF ANY LICENSED PUBLIC LIVESTOCK MARKET, BEFORE BEING OFFERED FOR SALE, SHALL BE INSPECTED BY AN AUTHORIZED VETERINARIAN OF THE DEPARTMENT OF AGRICULTURE.

We wanted to ask White about that, but he refused to return calls , so we paid him a visit at his auction house office.

He initially declined an invitation to explain on camera his inspection process and how he dealt with malnourished, sickly and injured animals on the lot. After agreeing to move the camera crew to the hallway, White invited reporter Chris Halsne to sit down and answer some questions.

White said he visually inspects animals, looking for signs of disease and puts a stop to the sale of “downed” animals.

When asked about the injured and neglected ones who arrive on the lot in questionable shape, White said, “In my opinion, it’s better off to end the animals’ suffering immediately because it’s easier going through the ring and going to go to slaughter than it is to put it through another shipping process to go clear home.”

When asked about the injured lamb that was recorded being sold, he hesitated, agreeing an animal in that condition should probably not have been sent through to sale. However, he continued to defend such sales, saying there are only a few of those a day.

“On the lambs … they have one place, uh, destination,” White said. “And that’s slaughter and our only other alternative would be to send it home.”

Centennial Livestock Auction is a family-run affair. Patriarch and owner Wayne Kruse said on the phone “It’s not possible to inspect every single animal that arrives.”

Kruse blamed ranchers for bringing in some unhealthy looking livestock and made it clear his staff was not to blame for any neglect of animals. He declined a request for an on-camera interview and sent a statement via email.

I elect not to do camera interviews.  Enclosed is my statement:  Thank You, Wayne L. Kruse – Centennial Livestock Auction

The welfare of animals sold at Centennial Livestock Auction is of utmost importance to our livestock auction market. The management and staff have received animal handling training and employ industry standard practices in daily operations. We work with local and state officials to ensure that we are in compliance with all regulatory standards. Further, we have taken additional voluntary measures to be assessed on our practices and receive certification for training in animal handling. Centennial Livestock Auction does not condone inappropriate treatment of animals, and encourages producers to make proper management decisions prior to marketing livestock.

We know what we saw and we know Centennial wasn’t in the mood to fully explain, so FOX31 Problem Solvers asked for all animal welfare inspections of the facility from the Colorado Department of Agriculture.

“While it’s true, I don’t have, nor does the Commissioner of Agriculture have, specific authority over vets at markets or market owners, but the laws are clear and do provide an abundance of protection,” said Keith Roehr, head of the Bureau of Animal Protection Division.

Roehr said he has what he described as a “working relationship” with Centennial and the other 25 livestock auction owners in Colorado. He admitted the state Agriculture Department has no “stick” to enforce the regulations regarding animal care.

“I think our recommendation to vets is to use discretion,” Roerh said. “If that animal would be better receiving care and coming back another day, then by all means they should do that.”

Royall laughed at the state’s idea of a self-policing livestock auction industry.

“Right! Self-policing systems are not great when we’re talking about animal welfare,” he said. “The state definitely needs to enforce the rules and regulations on the books to ensure the animals are cared for properly.”

But the reality is in Colorado, veterinarians like White are the first and only line of defense.

Halsne: “Nobody likes to see an animal suffer.”

White: “Oh, I understand that, but I don’t, most of the time, they don’t have an answer for what to do with (injured animals coming to auction) either. My answer is to get them out of here and get them to slaughter.”

White and the other veterinarians working for the other 25 licensed livestock auctions in Colorado are paid an “inspection fee” for every animal sold. That means the system is set up to financially reward the livestock auction vets for getting animals to the sales ring.

Because the state doesn’t keep inspection records on Centennial, FOX31 Problem Solvers asked the U.S. Department of Agriculture for its reports.

After months, we received more than 500 pages of heavily redacted reports. The records show no signs that federal inspectors who visited Centennial looked into issues with animal welfare and neglect.

Instead, records found federal inspectors focused on items such as “are fences secure” and “are records about ownership being kept.”

Inspectors did cite Centennial Livestock Auction several times in the past for failing to have accurate scales and violations for employees illegally buying up consigned livestock.

GLENWOOD/HOT SULFUR SPRINGS, Colo. (KDVR) -- Water usage has been restricted for residents in Glenwood Springs and Hot Sulphur Springs through Monday due to issues with the supply from the Colorado River.

The City of Glenwood Springs issued a stop to outdoor water usage and a cease of sprinkler system usage until 8 a.m. Monday.

SAN DIEGO (AP) — Germán Márquez outdueled Yu Darvish and hit a 418-foot home run off his fellow All-Star to lead the Colorado Rockies to a 5-3 victory against the San Diego Padres.

Brendan Rodgers and Elias Díaz also homered off Darvish for the Rockies, who beat the Padres for the second straight night and have won four of their last five games against San Diego.

“I think about her every day, but it’s a part of life. She and my dad prepared me for times like this. I’ve been relying on my faith a lot and relying on my teammates,” the Broncos third year tight end said. “They’ve been helping me out a lot. Justin Simmons is another one that I talk to quite a bit. They’ve been helping me out a lot and just being there for me. Von asks me every day how I’m doing and asks me when my dad is coming out. We have some great guys on this team.”