DENVER -- The commercials of candidates campaigning to be the next Governor of Colorado have started.

Businessman Victor Mitchell was the first to buy air time in the Denver television market.

Throughout the 2018 election season, the FOX31 Problem Solvers will "Truth Check" campaign commercials. Read our criteria and standards here.

Exact quote in ad: "I lead the winning fight to stop the biggest tax increase in Colorado History"

Reason: Mitchell in 2011 was a prominent spokesman for the Stop Colorado Jobs opposition campaign, quoted in numerous periodicals.

Exact quote in ad: "I lead the winning fight to stop the biggest tax increase in Colorado History"

Reason: Proposition 103 would have raised income taxes to 5 percent in 2011. It would have also raised sales taxes to three percent. It's "not exactly" true because Colorado previously had those tax rates in the late 1980's and 1990's until it was lowered in 2000.

Exact quote in ad: "The usual politicians are running but there is only one outsider businessman."

Reason: The insinuation here is Mitchell has never run for political office and is a complete outsider. In 2007-2009 Mitchell was actually an elected member of the General Assembly - serving as a state representative.

Mitchell is a successful businessman

Exact quote in ad: "A record of success"

Reason: Mitchell has managed or operated six businesses throughout his career - achieving enough wealth to self fund most of his campaign. It was reported he wrote a check in the millions to jump start his campaign.

Mitchell said "Two years in the General Assembly does not make me an insider. 30 years in business makes me an outsider."

The Truth Check team stands by our claim. 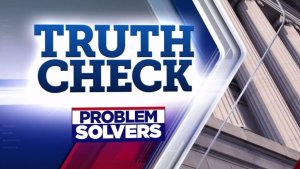 Read more about the series, the team evaluating the advertisements, and our criteria and ratings.

To contact the FOX31 Problem Solvers: Truth Check team, feel free to use this form.