Throughout the 2018 election season, the FOX31 Problem Solvers will be examining the commercials to see what is honest and what is misleading. See some of our previous “Truth Check” segments here.

You can also Read our criteria and standards.

Exact quote in ad: “As Colorado’s treasurer, I stopped the largest tax increase in state history.”

Reason: Stapleton without question campaigned against it. The Stapleton campaign says they said what they said because of a 2013 article praising Stapleton’s role in the effort.

The FOX31 Truth Check team however believes Stapleton attempts to take too much credit for shooting down Amendment 66. After all voters defeated Amendment 66, not the Colorado treasurer.

Stapleton led the fight against Amendment 69 in 2016.

Exact quote in ad: “I led the fight against a single payer health care system and we won again”

Reason: Without question Stapleton helped lead the effort against Amendment 69 in 2016 – after all he appeared in commercials against the effort and wrote editorials against it.

The TRUTH CHECK team however is basing our claim off of what Stapleton said in the adverstiment and not the graphics — taking issue with the fact the graphics appear to imply he stopped Amendment 69 on his own. 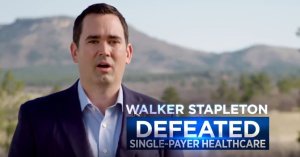 Exact quote in ad: “I was the only treasurer in the country with the courage to support Donald Trump’s tax cuts.”

Reason: This required little debate by the Truth Check team, since at least four other Republican state treasurers supported the Trump tax cuts.

Stapleton’s team said they were referring to this White House Press Release that listed Stapleton as a supporter.

That however is false since these state treasurers all helped campaign for the effort.  Missouri’s treasurer traveled to DC to testify in support of the bill. Kentucky’s treasurer wrote an editorial. 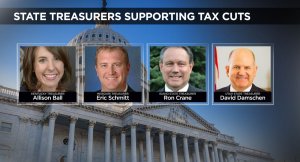 Every time the Truth Check team reviews a commercial — we give the campaign in question an opportunity to respond. Stapleton’s campaign used the opportunity to attack Democrat Jared Polis.

“Just today Congressman Jared Polis introduced a bill in Congress to repeal the Trump tax cuts, raising taxes on 75 percent of Coloradans and increasing taxes on families making $60,000 a year. This is unacceptable. As Governor I will work everyday, just as I did as Treasurer, for more economic prosperity for Coloradans and to keep more money in the hands of Colorado families.”

BRUSSELS (AP) — Holocaust survivors and politicians warned about the resurgence of antisemitism and Holocaust denial as the world remembered Nazi atrocities and commemorated the 77th anniversary of the liberation of the Auschwitz concentration camp on Thursday.

“I have lived in New York for 75 years, but I still remember well the terrible time of horror and hatred,” survivor Inge Auerbacher, 87, told the German parliament. “Unfortunately, this cancer has reawakened and hatred of Jews is commonplace again in many countries in the world, including Germany.”

FRANKTOWN, Colo. (KDVR) — Strawberry is a 14-year-old quarter horse who lost her left eye due to neglect by her owner. She was headed to slaughter, until Mimi Kuchman stepped in.

“All (horses) need is love. And once you see the love come through, and they feel that love, they will start to react to it and perform for you," Kuchman SAID.