DENVER — The Truth Check team continues to look at the candidates and their commercials in the governor’s race. Every advertisement that claims something — we will research and determine if the candidates are actually telling the truth. You can watch our previous “Truth Check” segments here.

You can read our criteria and standards here.

For the first time in this election cycle we are seeing the Democratic candidates go after each other.

Teachers for Kennedy, a PAC supporting Cary Kennedy, has launched an advertisement that goes after fellow candidates Jared Polis and Mike Johnston. What makes this unique is that Kennedy, like the other Democrats, signed a clean campaign pledge this cycle. The pledge vowed to not attack fellow Democrats. This latest ad however is from a PAC who obviously not bound by the pledge.

Reason: It is true that Polis supported a voucher experiment in Colorado in 2003. He wrote an op-ed for the Rocky Mountain News while on the Board at the Department of Education. 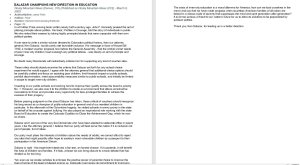 However the implication that Polis is “pro voucher” goes a step too far in the Truth Check’s opinion. Polis has repeatedly voted against  vouchers in Congress and has maintained an “A rating” with the National Education Association.

Reason:  The bill the PAC is referencing is SB 10-191, signed into law in 2010. The measure created new standards  and evaluations for teachers and principals. It is true the Colorado Education Association opposed the bill, however the American Federation of Teachers Union supported and Democratic governors Lamm, Ritter and Romer wrote an op-ed supporting the effort.  As a result the Truth Check team believes it’s misleading to say it’s anti-teacher and conservative.

Kennedy is an unwavering progressive

Exact quote in ad: “The only candidate who doesn’t waver on progressive values”

Reason: While the Truth Check team believes Kennedy is progressive when it comes to education — the claim is broad and needs context. One could argue marijuana rights is a progressive tenet in Colorado politics – especially since tax revenue is used for education. Kennedy opposed the legalization of marijuana initially.

Reason: Kennedy is credited as authoring Amendment 23 – which increased education funding – as well as helping write legislation to create the BEST program – which helps rebuild schools through oil and gas and marijuana resources.

The Teachers for Kennedy stood by their claims against Polis and Johnston in a conference call Wednesday. FOX31 Denver asked the Kennedy campaign if she would distance herself from the PAC ad since it is negative. We received this response:

“I am honored to have the support of teachers and appreciate their desire to make schools better. They took a close look at the candidates running for governor, asked hard questions, and decided my vision for education and record would best serve the students of Colorado. They produced this ad independent of my campaign and I cannot legally coordinate with them. I’ve pledged to keep my own campaign positive and I encourage all of the independent groups including those supporting my candidacy to do the same.”

Governor John Hickenlooper discusses the ad in the video clip below.