DENVER — He was out of the race and now he is back in.

Democratic Congressman Ed Perlmutter, who has represented Jefferson County in Congress since 2007,  announced he will in fact run for his seat after all.

Last month, when Perlmutter dropped out of the race for Governor, he announced he would not seek his congressional seat either. That has now apparently changed.

“I’ve made some missteps here there is no question about it,” Perlmutter told FOX31 political reporter Joe St. George.

The confusion will likely torpedo the efforts of four Democrats who were hoping to win Perlmutter’s seat. 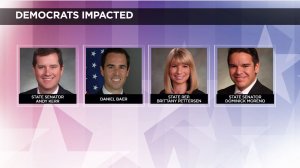 “I’m sorry I created kind of a mess,” Perlmutter said — speaking to the confusion among Democratic candidates.

As of Monday evening, Pettersen and Moreno, two candidates have dropped out of the race.

Perlmutter said he made the decision Monday morning after being asked to reconsider his decision by constituents over the last several weeks.

“I have the energy and I have the desire,” Perlmutter said.

MINNEAPOLIS (AP) — Former Vice President Walter Mondale, a liberal icon who lost the most lopsided presidential election after bluntly telling voters to expect a tax increase if he won, has died. He was 93.

DENVER (KDVR) -- The Colorado Supreme Court has accepted an Arapahoe County judge's resignation after she made racist remarks and committed other violations while she was working. It also agreed to publicly censure Natalie Chase. She was a judge for the 18th Judicial District.

According to court documents, early last year during a work trip to Pueblo, Chase asked a Black family court facilitator why Black people can use the N-word even though white people can't. She also asked the employee if the word carried a different meaning if it ends with an "a" instead of an "er." She also used the word several times during the conversation and the employee said she was uncomfortable because she couldn't leave the car or the conversation.

DENVER (KDVR) -- Lawmakers from both sides of the aisle gave Rep. Jeni Arndt a standing ovation following a 20-minute tribute on her last day in the legislature Friday.

Arndt resigned from the General Assembly after serving as a state representative since 2015. She won the race to become the next mayor of Fort Collins earlier this month.