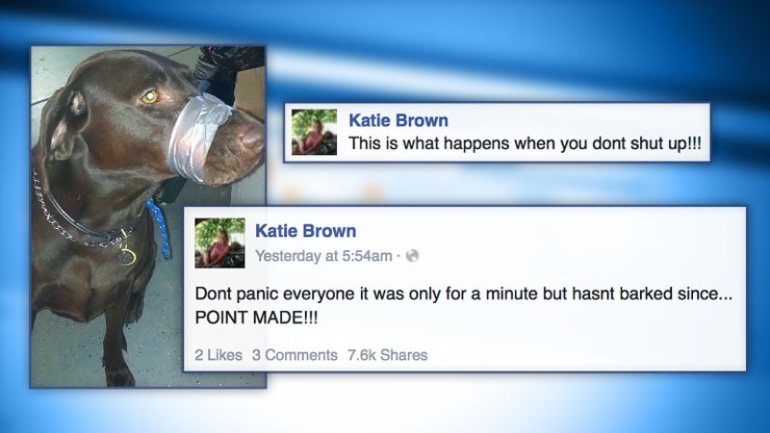 CARY, N.C. — The woman accused of posting a photo of a dog with its mouth wrapped in duct tape on Facebook was arrested in North Carolina.

On Friday, Katharine Lemansky, who uses the name “Katie Brown” on Facebook posted the picture of her chocolate lab-mix with the caption that said “This is what happens when you don’t shut up!!!”

On Monday, Lemansky was charged with cruelty to animals by the Cary Police Department after she told police the incident took place in North Carolina.

“Taping the dog’s muzzle shut was a terrible decision on Ms. Lemansky’s part, and charging her with animal cruelty under North Carolina law was the right thing to do,” Cary Police Capt. Randall Rhyne said in a release on Monday.

Police said there are no additional charges pending against Lemansky.

“At the same time, it’s important to also note that our animal control officers who physically examined both Brown and her littermate found the dogs to be very well cared for, which is why we did not and could not remove them from the owner. The dogs are current on their shots, spayed, and microchipped. They are clean and well-nourished and appear to be comfortable in their surroundings. And there were no signs of injury to Brown’s muzzle, not even detectable hair loss,” Rhyne said.

Cary police said they worked with law enforcement officials across two states. On Saturday, police in Avon, Conn., said they went to the address that she had lived at but she reportedly hasn’t lived there for some time.

Torrington, Conn., police said the incident didn’t happen in town and that she doesn’t live there, and police in South Daytona, Conn., said the woman hasn’t lived in town for more than a year.

(CNN) -- With the summer wedding season around the corner, the coronavirus outbreak could leave brides-to-be in panic: Some may be unable to get the wedding gown they want for their big day.

China is a leading supplier of wedding gowns. As much as 80% of the world's western-style gowns are produced there, according to the American Bridal and Prom Industry Association. Many factories in China have remained closed this year as the country attempts to curb the spread of the coronavirus.

HONOLULU (KHON) – The mother of two Idaho children who disappeared five months ago has been arrested in Hawaii.

Kauai police arrested 46-year-old Lori Vallow, also known as Lori Daybell. She was taken into custody Thursday and has been charged with multiple counts linked to the disappearance of 17-year-old Tylee Ryan and 7-year-old Joshua “J.J.” Vallow.

INDIANAPOLIS, Ind. (WXIN) — Three good Samaritans, including a woman who'd given birth three days earlier, rushed to the rescue of a truck driver after a massive explosion in Indiana.

"We see a plume of smoke, huge smoke, it looked like a warehouse was on fire,” said new mom Holly McNally.