DENVER — The eclipse of the century is fast approaching on Monday — and it will be a show for the ages.

It has been nearly 100 years since a total eclipse has moved from coast to coast across the United States.

This one will be unique, as it travels more than 3,000 miles over land, where tens of millions of Americans will be able to view it, a vast difference from many eclipses that occur over oceans or remote regions of Earth.

It will be a total eclipse in a small swath from the West Coast to the East Coast and a partial eclipse for the entire North American continent.

What can be seen will vary greatly depending on the location.

The eclipse will spread from Oregon around midmorning, West Coast time, to the South Carolina coast about 90 minutes later, about 12:45 p.m. MDT.

The relatively small 70-mile-wide path will provide the greatest show. 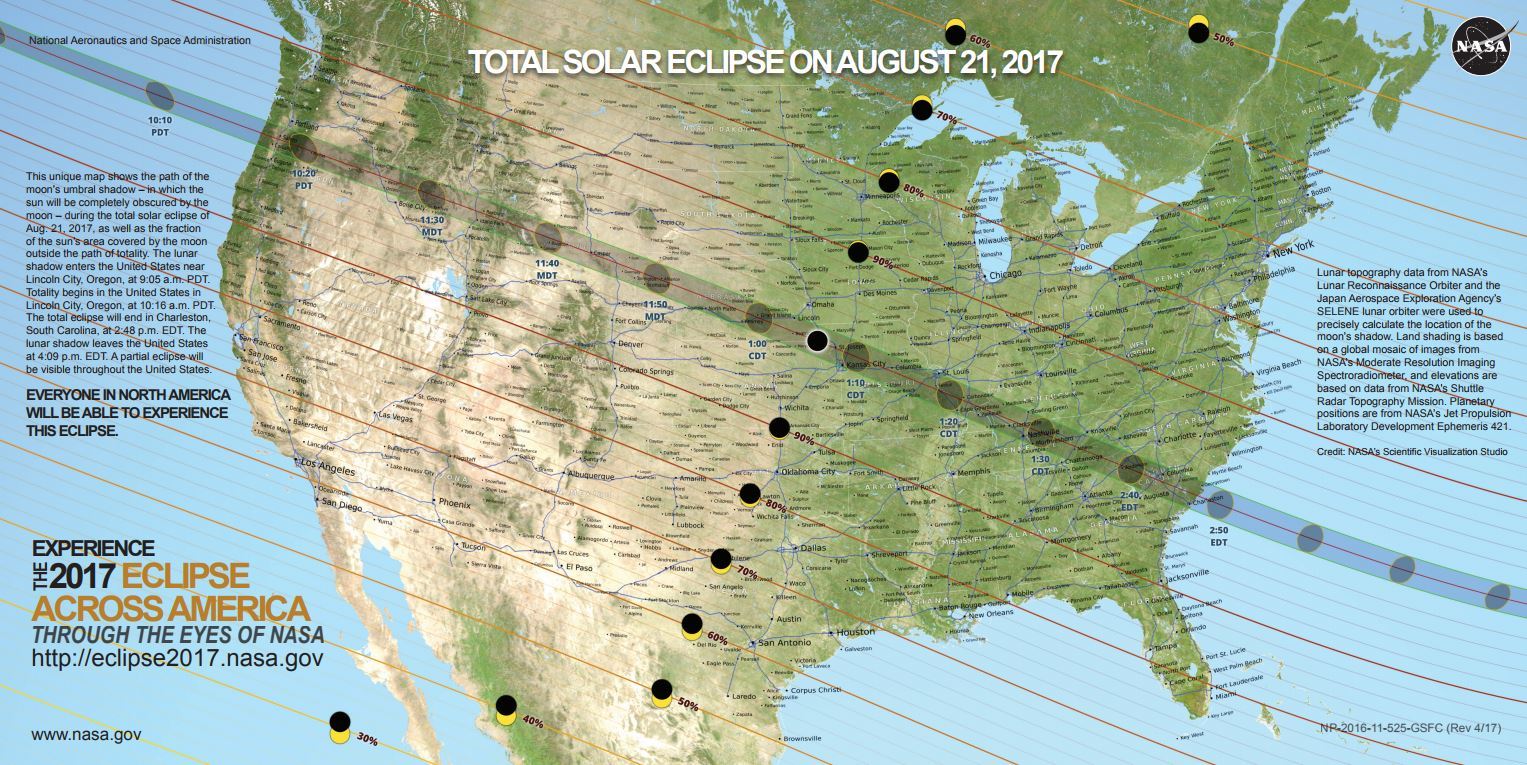 Within this area, a total eclipse will occur as the moon aligns with the sun to an umbra. In this shadow region known as totality, the sun will be 100 percent covered, and it will become dark.

Colorado will miss out on totality by about 170 miles. In Denver, about 92 percent of the sun will be covered by the moon with more coverage farther north.

Scientists such as Kelly Beatty, a senior editor with Sky and Telescope magazine who has witnessed a dozen total eclipses, advise that people will want to be in that path.

“This is one of those cases where being close isn’t good enough,” he said.

Dave Jones, CEO of StormCenter Communications, whose group is helping states in the path prepare for the eclipse, agrees.

“Is 99 percent coverage good enough? My simple answer is no. Only in totality can you take off your protective glasses and watch with the naked eye. Some people call it a life-changing experience or even spiritual.”

“Only in totality can you witness the corona, the hot gases that surround the sun,” Beatty said. “The stars come out; the temperature drops; you see a bright glow around the horizon, and clouds in the distance can blink out. People are thrilled by the senses around them. When you see it, it’s overwhelming.”

An estimated 12 million people are lucky enough to have a front row seat, living within that narrow path of totality.

The largest cities include Nashville, Tennessee; Greenville, Columbia and Charleston, South Carolina; the north side of Kansas City, Missouri; and the south side of St. Louis.

But NASA estimates 200 million Americans live within a day’s drive of totality, and many of them are expected to head to where the show is best.

Traffic could become a big issue. Matt Hiebert, assistant director of communications for the Missouri Department of Transportation and the man who is helping coordinate the message for the states in the path of the eclipse, says tens of millions could make the drive.

“In Missouri, we expect anywhere between 300,000 and 1.2 million out-of-state guests driving in,” he said. “We’re preparing for the bigger number. Missouri alone has 107 events planned.”

The estimates are highest for South Carolina, where more than 2 million visitors are expected.

The Colorado Department of Transportation is warning of a traffic nightmare on Interstates 25 and 76 as people head to Wyoming and Nebraska for the show.

“Find a location and arrive early and plan on staying later,” he said.

He expects the worst traffic to occur immediately after the eclipse, when everyone leaves at the same time.

“Have a full tank of gas, and pack food and water. Don’t take pictures or wear your protective glasses while driving,” he said.

“Don’t stop along the side of the road, and above all, watch out for pedestrians. Lots of people are going to be looking up at the sky and not paying attention.”

Small towns in the path of totality will blossom into metropolises. Glendo, Wyoming, southeast of Casper on Interstate 25, has a population of 200 but is expecting upward of 100,000 visitors on eclipse day.

Some communities have turned to Kickstarter to help fund what could be a strain on their budgets for things as simple as portable toilets.

Jones jokingly calls it “the day of national gridlock outside of Washington” and likens it to the experience of a full-blown hurricane evacuation.

“In Hurricane Floyd in 1999, you had millions evacuating. It was taking as long as 15 hours to get from Myrtle Beach to Columbia, South Carolina.”

“Some rural communities will look like Woodstock did in the ’60s,” Beatty said.

The big key is the weather.

The National Weather Service — which crunched the numbers for Aug. 21 — shows that coastal sections of Oregon and South Carolina have the greatest threat of clouds, along with areas east of the Mississippi River.

The Intermountain West of Idaho and Wyoming has the best chance of clear skies.

Tens of millions are expected to see this once-in-a-lifetime celestial event. Hopefully, Mother Nature will cooperate.

Is Russell Wilson getting sacked more than normal?

Is Russell Wilson getting sacked more than normal?

Loveland Pass reopens in both directions after avalanche

What to do before Tuesday’s snowstorm

Preparing ahead of the snowstorm

The best products we’ve tested and loved on sale …

Best gift ideas under $100 and on sale now

The best deals on affordable tech from Apple to Samsung …

What to do 24 hours ahead of Tuesday’s snowstorm

Eastbound US 6 reopened in Lakewood after crash

Loveland Pass reopens in both directions after avalanche