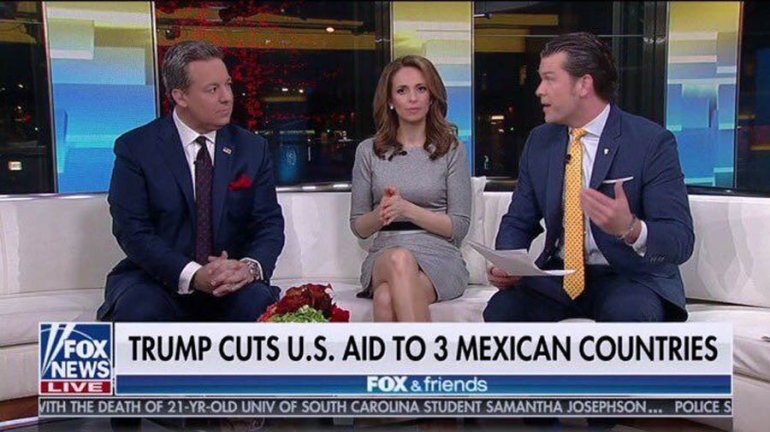 The graphic went on the air at the start of the show as the hosts Ed Henry, Jedediah Bila and Pete Hegseth discussed the State Department’s plan to cut foreign assistance to El Salvador, Guatemala and Honduras.

Trump has threatened to close the U.S.-Mexico border.

The show later apologized on the air, saying the graphic was inaccurate.

“Now we want to clarify and correct something that happened earlier in the show,” Henry said.  “We had an inaccurate graphic on the screen while talking about this very story.

“We just want to be clear, the funding is being cut off to the three Central American countries. We apologize for the error. It never should have happened.”

SAN FRANCISCO (AP) — The San Francisco school board has voted to remove the names of George Washington and Abraham Lincoln from public schools after officials deemed them and other prominent figures, including Sen. Dianne Feinstein, unworthy of the honor.

After months of controversy, the board voted 6-1 Tuesday in favor of renaming 44 San Francisco school sites with new names with no connection to slavery, oppression, racism or similar criteria, the San Francisco Chronicle reported.

LAS VEGAS (KLAS) -- The spread of the coronavirus across the Southwest U.S. may be attributed to visits to Las Vegas, according to a study from smart thermometer company Kinsa Health.

“Travel to Las Vegas in recent months and a new coronavirus variant have likely contributed to the rapid, regional spread of cases across Southern California, Arizona and Nevada,” the company wrote Monday on its Health Weather website. “The data also shows strong correlations between the sickest counties and higher rates of travel to businesses along the Las Vegas Strip after New Year’s, as well as earlier in December, when the new variant took hold.”

MYSTERY WIRE -- Amid the COVID-19 pandemic, which is set to kill well over 2 million people around the globe, an international countdown of what leading science and security experts say represents a threat to human existence remains stuck at less than a two-minute warning.

Scientists say the mishandling of the grave global health crisis is a "wake-up call" indicating that governments, institutions and a misled public remain unprepared to handle the even greater threats posed by nuclear war and climate change.

Grade point averages went up for graduating seniors, but districts made accommodations