DEARBORN COUNTY, Ind. — A man from Denver was arrested in Indiana after state police troopers found several packages of marijuana in an SUV during a traffic stop Wednesday.

It happened on Interstate 74 in Dearborn County when a 2004 Ford Excursion was stopped for a traffic violation.

“While conducting the traffic stop, Trp. [Randel] Miller became suspicious that criminal activity was taking place. Trp. Miller deployed his narcotics detection K-9 ‘Jinx’ to conduct a sweep of the vehicle. Jinx alerted to the odor of drugs coming from the vehicle,” Indiana State Police said in a statement. 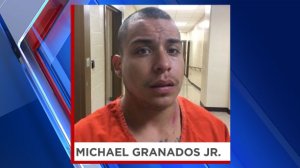 “During the search of the vehicle, troopers located numerous individually wrapped plastic bundles containing suspected marijuana. The packages were hidden in various locations inside the vehicle. In total, the packages weighed approximately 33 pounds with an estimated street value of $150,000.”

Michael Granados Jr., 23 of Denver, was taken into custody. He was a passenger in the vehicle.

Troopers said they determined the marijuana had originated in Colorado and was being taken to an unknown location in Ohio.

In a separate case on the same day, a man from Colorado Springs was arrested during a traffic stop in Indiana.

State police found 75 pounds of marijuana and other drugs in his vehicle. They said he was also on his way to Ohio.

LAKE BUENA VISTA, Fla. (AP) — It was exactly one year ago Sunday when Jimmy Butler walked into the Miami Heat practice gym, took a seat on a makeshift stage and said he wanted to be part of the team’s next title run.

He’ll have that chance.

BILLINGS, Mont. (AP) — A federal judge ruled Friday that President Donald Trump's leading steward of public lands has been serving unlawfully, blocking him from continuing in the position in the latest pushback against the administration's practice of filling key positions without U.S. Senate approval.

U.S. Interior Department Bureau of Land Management acting director William Perry Pendley served unlawfully for 424 days without being confirmed to the post by the Senate as required under the Constitution, U.S. District Judge Brian Morris determined.

WASHINGTON (AP) -- Republicans are expecting President Donald Trump to announce Saturday that he is nominating Judge Amy Coney Barrett to the Supreme Court as he aims to put a historic stamp on the high court just weeks before the election.

Conservative groups and congressional allies are laying the groundwork for a swift confirmation process for Barrett, even before Trump makes the selection official in a Rose Garden ceremony Saturday evening. They, like the president, are wasting little time moving to replace the late Justice Ruth Bader Ginsburg, organizing multimillion-dollar ad campaigns and marshalling supporters both to confirm the pick and to boost Trump to a second term.