EL PASO COUNTY, Colo. — The El Paso County Sheriff’s Office on Saturday made its 10th arrest in connection to a double homicide, bringing the number of people arrested while investigating the case up to 18, many of whom are believed to be part of a newer gang in the area.

Endo Velarde turned himself in to the Criminal Justice Center around 7:10 p.m. Saturday. 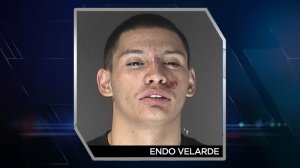 He is being charged with attempt to influence a public official in the deaths of Derek Greer and Natalie Partida. He was also booked on an outstanding warrant unrelated to the homicides.

Many of the people arrested are connected to a gang called the South Side Soldados, which means soldiers in Spanish. It’s a newer gang in El Paso County. It is not believed the two teens killed were in the gang.

There were two new arrests in the case Friday.

Breeana Dahlberg was in custody on a charge of second-degree kidnapping. Deputies also took Carlos “Tink” Meza into custody.

The sheriff’s office previously had said he was a suspect who was on the run and it requested help from the public in finding him.

Meza was found along Fountain Creek’s bank hiding under a log, the sheriff’s office said. He faces a charge of possession of a weapon by a previous offender.

Eighteen people have been arrested on felony charges during the investigation. Nine of those are directly related to the kidnapping and deaths of the two Coronado High School students.

The bodies of Partida, 16, and Greer, 15 were found dumped on the shoulder of Old Pueblo Road, just south of Colorado Springs, on March 12.

Little has been released on how or why the two were killed, but the investigation has been nonstop.

“It hits home for a lot of us because we have children and if they are not that age, they have been that age once or they will be that age at some point in the future so it hits very, very close to home,” Kirby said.

One week after the deaths, investigators arrested the first suspect in the double slaying.

That brought the total to eight people behind bars directly related to the death, kidnapping, aggravated robbery and child abuse of the teens.

“We do feel we have the key players in those homicides in custody,” Kirby said.

On Thursday, during a search of a home possibly connected to the deaths, eight more people were taken into custody on felony charges, though none is believed to be involved in the deaths or Greer and Partida.

“Not only are we looking to clear this homicide, we are also getting other dangerous criminals off the street,” Kirby said.

This is the first double homicide involving teens the El Paso County Sheriff’s Office has had to investigate.​

ALTOONA, Pa. (WTAJ) -- If you live in Altoona, Pennsylvania, and are missing some shoes, we might have an answer for you.

A six-pound, furry and sneaky "cat" burglar has been scouring his neighborhood every night for his greatest treasure: shoes.

In the new spinoff Restaurant Impossible: Back in Business, premiering Thursday, July 30th at 9pm ET/PT on Food Network, Robert continues his quest as he helps previously featured restaurants affected by the current pandemic.

Forced to adapt to a new way of doing business, Robert looks to rescue these desperate restaurant owners from complete collapse once again. With Robert’s tireless work ethic, genuine care, and a little outside-the-box thinking, Restaurant Impossible: Back in Business shares heartfelt stories of perseverance and hope.

COLORADO SPRINGS, Colo. -- The father of Christopher Abeyta, the 7-month-old boy who disappeared from his Colorado Springs home in 1986, has died, family members said.

Gil Abeyta died after a heart attack, according to his daughter, Denise Alves.

How Biden chose Harris: Inside his search for a running mate