Paul Dacko, 63 of Wheat Ridge, was pronounced dead at the scene of the crash on Highway 285 at C-470, the Colorado State Patrol said.

The Colorado State Patrol said Dacko was traveling northbound on Highway 285 just after 11 p.m. when he was struck from behind by a Mazda Protege. 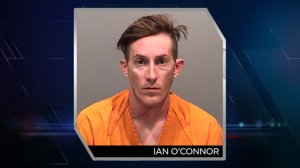 Dacko was ejected, and was thrown across the median and into the southbound lanes, the Colorado State Patrol said.

The driver of the Protege, 31-year-old Ian O’Connor from Denver, tried to flee on foot but was found at a nearby gas station.

He was taken to St. Anthony Hospital in Lakewood to be treated for minor injuries then booked into the Jefferson County Jail.

O’Connor is being held without bail and is facing charges of vehicular homicide, reckless driving, driving under the influence, hit-and-run resulting in death, and failure to notify police and remain at an accident.

A GoFundMe page has been set up to help pay for Dacko’s funeral expenses.

ADAMS COUNTY, Colo. (KDVR) -- The trial is underway for the man charged with shooting and killing Adams County Deputy Heath Gumm following a mistrial in April.

According to an order released from the Adams County District Court, a mistrial was declared due to the safety issues surrounding the coronavirus pandemic.

LAFAYETTE, Colo. (KDVR) -- The Lafayette Police Department said officers and animal control had to help free a fox tangled in a net on Monday morning.

WASHINGTON (NewsNation Now) — On the day before the first Presidential Debate between incumbent President Donald Trump is scheduled to hold an event on the pandemic.

President Trump is expected to deliver updates on the nation's coronavirus testing strategy, according to the official White House schedule. The speech will happen at 2 p.m. ET.