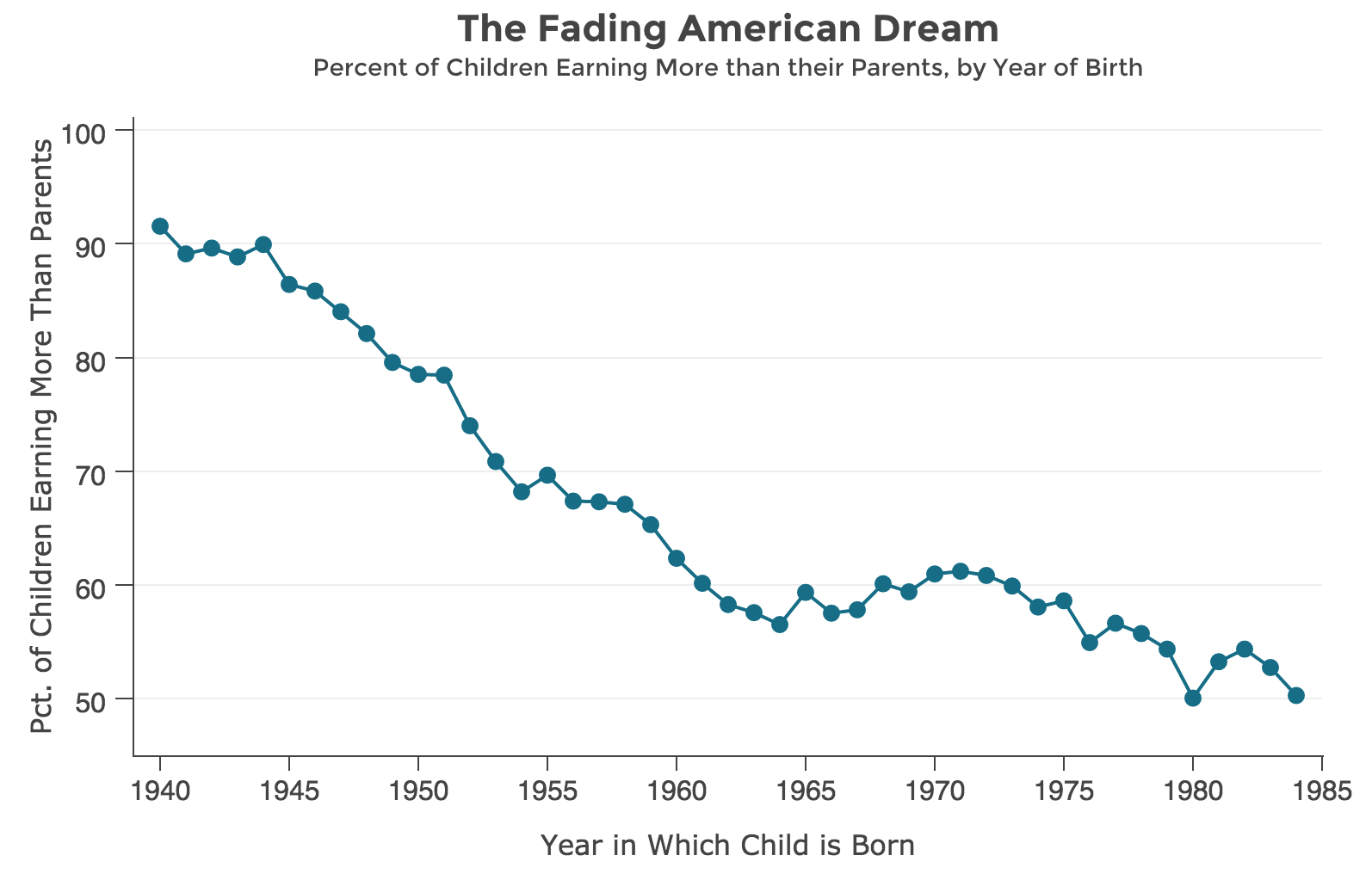 WASHINGTON — The American dream isn’t dead, but it’s got one foot in the grave, according to new research.

The Washington Post reports that 92 percent of people born in 1940 earned more money at 30 years old than their parents did when they were the same age.

Researchers say doing better than your parents is the American dream, economically speaking. But for people born in 1980, that percentage had dropped to 51 percent, according to the Wall Street Journal.

That means barely half of today’s 30-somethings are doing better than their parents. People born in the middle class and the Midwest have seen the steepest declines. The New York Times calls it some of the “most eye-opening economics work in recent years,” as well as “deeply alarming.”

A slowing economy doesn’t explain the drop-off in the American dream, and researchers place the blame largely at the feet of growing inequality.

Over the past 30-some years, nearly 70 percent of income gains went to just the richest 10 percent of Americans.

Researchers say that if inequality had stayed where it was in 1970, 80 percent of today’s 30-year-olds would be outearning their parents.

“We need to have more equal growth if we want to revive the American dream,” researcher Raj Chetty said.

Without addressing inequality, researchers say the economy would need to grow 6 percent annually to reverse these trends.

President-elect Donald Trump is only promising to grow it by 3.8 percent per year. Experts say it’s more likely to be closer to 2 percent. (The American lawn, too, has seen better days.)

This article originally appeared on Newser: The American Dream Is Dying, and Inequality Is Killing It

DENVER (KDVR) -- Just four months into legalized sports betting in the state and the percentages continue to increase, according to the Colorado Department of Revenue’s Division of Gaming.

In a report released on Friday, the state claimed a total of $128,646,209.09 for both retail and online sports betting for the month of August. This was an increase of almost $70 million from July, a 117% increase.

The national chain of ax-throwing bars plans to open the 5,000-square-foot space at 1505 N. Ogden St. in Uptown as soon as November.

Strategic Wealth Designers: Up and down, stock market’s shaky September

Markets feel by over 900 points at one point on Monday before seeing some modest gains yesterday.  Timing the stock market is nearly impossible but September has proven to be especially rocky. Independent wealth management advisor Jordan Schwartz of Strategic Wealth Designers joined KDVR to talk about the ongoing struggle for investors trying to build a safe financial plan. He says too often he is seeing retirement plans with entirely too much risk in the portfolio.