PARACHUTE, Colo. — A suspected member of the Crips street gang who was wanted on several active felony and misdemeanor arrest warrants was arrested last week after he was found hiding in a suitcase, the Parachute Police Department said.

On Oct. 13, officers and members of the Garfield County Threat Assessment Group went to the last known address of Nathaniel Arlington, 48.

They made contact with a woman who gave them consent to search the apartment. The woman told officers she hadn’t seen Arlington for a couple of days. 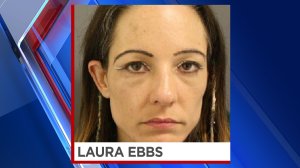 Investigators eventually found Arlington hiding in a suitcase. He told them his name was Luther Rankins and wouldn’t change his story, police said.

Arlington was arrested and charged with violation of bail bond conditions, criminal impersonation and obstructing a peace officer.

The woman in the apartment, 35-year-old Laura Ebbs, was charged with attempting to influence a public servant and false reporting to authorities.

Charlottesville, Va. (WRIC) -- After seven years in the Army, one Virginia veteran says adjusting back to civilian life has not been easy.

“For me, it’s like climbing Mount Everest every time I leave my house,” said Michelle, who was diagnosed with post-traumatic stress disorder. She did not want her last name used.

He is 5 feet, 7 inches tall, 185 pounds and has developmental disabilities. He is wearing a flowered T-shirt with blue/white striped shorts.

JEFFERSON COUNTY, Colo. (KDVR) -- The Jefferson County Sheriff's Office says a woman spotted near vandalized campaign signs has been identified and issued a summons for criminal mischief and trespass.

According to the sheriffs office, the signs were vandalized on Golden Gate Canyon Road.

Could cats hold the key to a COVID-19 vaccine?