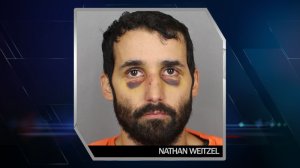 CENTENNIAL, Colo. — A Colorado father involved in a bad crash in Centennial told Arapahoe County sheriff’s investigators he crashed on purpose because he was trying to kill his son.

The crash happened just after 11 a.m. Aug. 21 on Eudora Way in Centennial. Witnesses said it was horrific to watch.

“There were no screech marks. There was no hitting brakes. Just this horrible sound,” said Cindy Rosa, a witness who called 911. 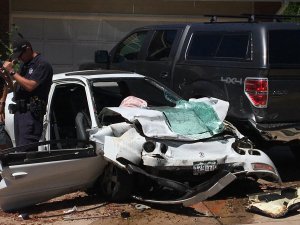 Weitzel told Arapahoe County sheriff’s deputies he was traveling between 65 and 75 mph when he rammed his vehicle into a parked car in the neighborhood.

He told investigators, “I was trying to kill my son. I did it on purpose.”

According to the arrest warrant, he also told investigators, “The reason he wanted to kill his son was because being a father is a big responsibility and he did not think he was man enough to raise a child.”

Weitzel allegedly said he took the 2-year-old to a park where he planned the death. He said he then drove around looking for a good place to crash his car to kill his son.

“There’s no words. I just fell to the floor and I started crying and I kept saying, my baby boy, my poor boy,” said Nancy Lopez, the boy’s mother.

Lopez shares custody of their son with Weitzel.

Witnesses said Weitzel tried to fight firefighters who responded to the crash scene. Investigators said that happened when firefighters tried to prevent Weitzel from slitting his throat with a piece of glass.

“I heard a youngster crying but didn’t see him at first and then finally we saw the top of the baby’s head and saw dad hitting it like he was annoyed by the crying that was happening,” Rosa said.

The boy suffered a broken leg, a concussion and a big cut to his forehead that required about 20 stitches.

“He’s such a strong boy and I thank God every day that he’s alive and keeps healing and hopefully, eventually, he’ll be able to walk again,” she said.

The toddler is out of the hospital and recovering at home.

Which Denver suburb is home to world-class hunting?