BOULDER COUNTY (KDVR) — It’s happened again. A rockslide closes a major road in Colorado — this last one in Boulder County along a stretch of Highway 119 called The Narrows.

It happened Tuesday night and some witnesses compared it to the size of a school bus, likely induced by heavy precipitation of rain and snow.

Thankfully no one was hurt. It’s also a humbling reminder when you see a falling rock zone sign on the side of the road to proceed with caution as you never know what you’ll find around the bend.

Rockslides happen every year in Colorado. Most are small, but some are more significant and impactful, closing roads at times for days or even weeks. The phenomena is so common it’s a cause for humor among first responders.

On Highway 145 north of Cortez in southwest Colorado over Memorial Day weekend 2019, one such slide shut down the road down for a few months while crews blasted the rock into smaller pieces and repaired the road surface and barriers. This was after a rock the size of a small building, weighing in at more than 2.5 million pounds, fell and blocked the highway.

While rock falls can be random with micro earthquakes or the settling of the bedrock below, often the freeze/thaw cycle is the driving force for big shifts.

This is common in springtime in Colorado after the weight of the snow gives way to massive melt. Gravel and mud are lubricated and boulders that were once stuck slide freely under gravity’s influence. Sometimes something as subtle as thunder, loud exhaust pipes or the heavy foot of a passing Elk can spark a slide, but, by far, water is the driving force.

What you can do to stay safe?

Slides happen at random, but are more likely during times of heavy precipitation. Radar estimates suggest the area of last night’s slide received between 0.9 inches and 1.23 inches of rain. (Right-hand column features rainfall reports from last night until this morning.) 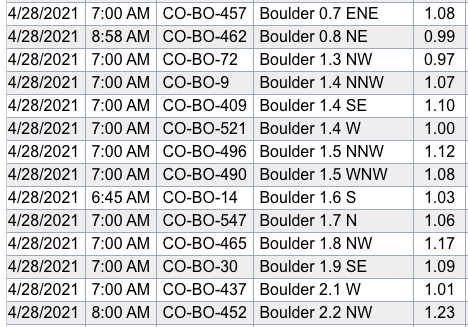 The safest bet is to consider mom’s advice and stay off the roads, especially mountain roads, when it’s dark and stormy. Rockslides, like snowy travel, are risks of living and traveling in Colorado.

Casualties from rock falls are extremely rare but certainly possible.