ARVADA, Colo. — More details have been released in the “chemical bomb” attack that injured an Arvada police officer last weekend.

Maxwell McCann, Braiden Ulmer, Isaac Koch, Gavin Dawson and an unidentified juvenile are all suspects in the case. An arrest affidavit released Thursday afternoon describes the night of the alleged assault in detail. 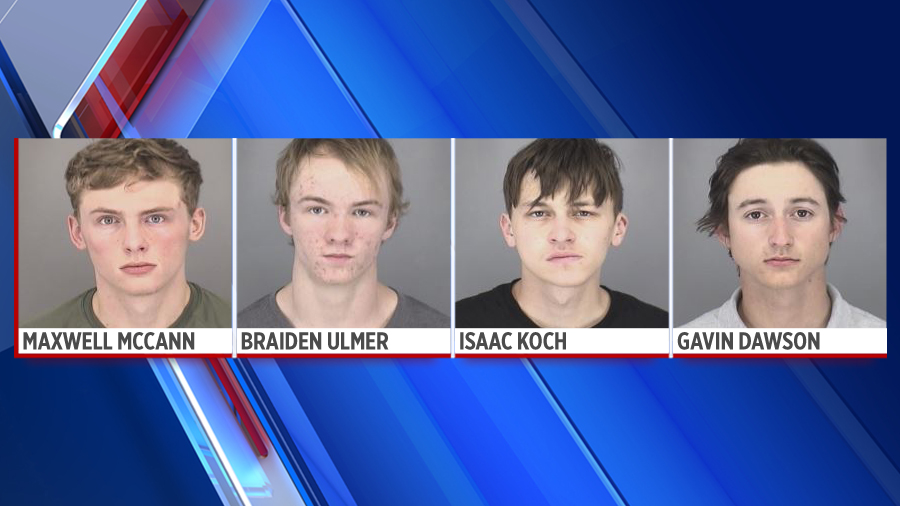 According to the document, the officer came under attack while investigating a report of street signs strewn across the road at West 68th Avenue and Beech Street.

The caller who reported the strange sight later met up with the responding officer.

The affidavit said that the officer was injured after he noticed a plastic bottle laying on the ground near the signs, which were strung together with saran wrap, creating a “barricade” across the road.

As the officer investigated, someone running a short distance away shouted a profanity and the officer said another bottle was thrown in his direction.

That bottle started “shrinking and releasing ‘a ton’ of white colored smoke,” the affidavit states.

Both the caller and the officer reported smelling chlorine; what is believed to be a chemical bomb eventually caused the officer to pass out.

According to the affadavit, the officer’s “chest felt tight, he lost his strength and was unable to get up, he was light headed, had shortness of breath and her felt like he was going to throw up.”

Backup officers called an ambulance and the officer was taken to a hospital, where he was decontaminated and treated for his chemical exposure. He was diagnosed with sustaining a chlorine gas exposure.

Fellow officers set up a perimeter around the scene and temporarily stopped a group of teenagers in a silver Volkswagen. Officers took photos of the teens’ driver’s licenses and let them go.

As authorities investigated the scene, they found additional similar devices.

A Walmart receipt discovered in the field eventually led to the teenagers’ arrests.

The receipt found by officers listed several items that are used to make a chemical bomb that were also found at the scene.

Surveillance video from the Walmart placed the teens at the store purchasing those items.

Dawson, Koch, McCann, Ulmer and the unidentified juvenile were all eventually taken into custody.

Throughout the course of an interview with investigators, McCann claimed he didn’t know the bombs were harmful.

Dawson told police he and his friends intended to make the bombs but were “just dickin’ around with them” and intended to leave them in “random places.”

Ulmer also admitted to going to Walmart to buy the supplies and the juvenile admitted to yelling a profanity at the officer.

The suspects are due in court on Friday.

BOULDER, Colo. (KDVR) -- A mass shooting in a Tennessee grocery store that left one person dead and 12 others seriously injured is stirring up emotions for survivors of the Boulder King Soopers shooting.

On March 22, Emily Giffen, a former King Soopers employee, was taking a break when she heard gunshots and saw the gunman.

DENVER (KDVR) -- Fans going to the Denver Broncos game Sunday, are in for a treat: trendy restaurants and the latest in cashless technology.

Thursday, Bronco Brass gave the media a tour of some of the shiny new concessions, including “Downtown Mile High,” which boasts three well-known local eateries:

SUMMIT COUNTY, Colo. (KDVR) -- As school districts across the nation deal with a shortage of bus drivers, a Summit County student is getting high grades for his creativity to get to class.

Jason Smith says because of the shortage, they weren't sure if his 12-year-old son Josh would have a seat on the bus when the school year started, so Josh approached him with a plan.