DENVER — A Denver restaurant with previous food safety violations is once again being inspected after a video surfaced showing a rat inside the restaurant.

Dominic Trujillo says he took the video on Sept.16, while waiting for Mt. Fuji Sushi & Hibachi to open. The video appears to show a rat eating food scraps between the glass and a window shade at the restaurant off of East Sixth Avenue in Capitol Hill.

He posted the video on social media and says a manager sent him a private message, offering a gift card in exchange for taking the video down. 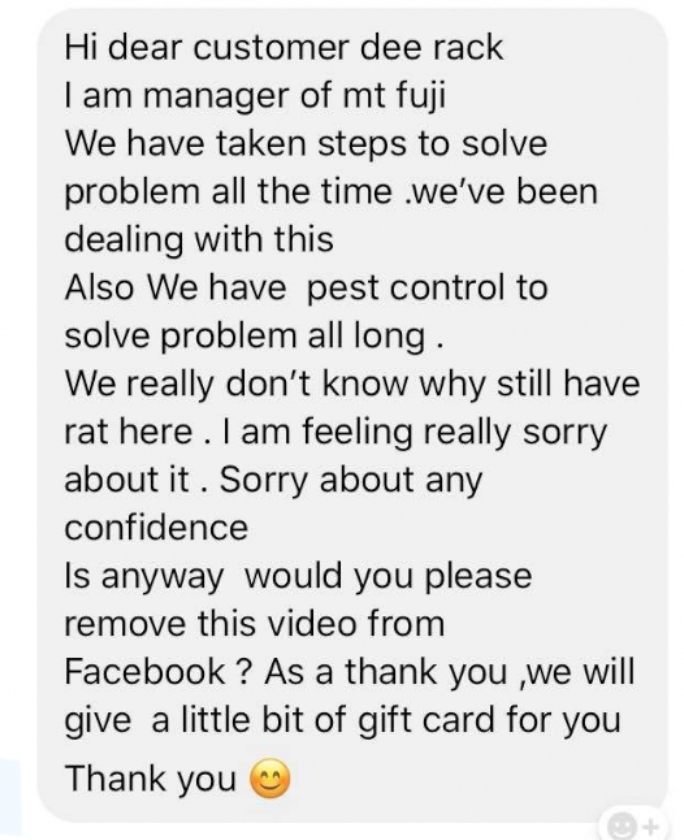 The Denver Department of Public Health and Environment visited the restaurant Wednesday after seeing the video and found no violations.

“Yesterday we had the health department come and they checked everything, inspected everything, and everything looks fine,” said Osa Enebish, with the restaurant. “Our back door — it was left open and we fixed that door, so it might have came through that door, we don’t know.”

Inspectors found additional rodent activity in August, according to a spokesperson.

The Denver Department of Public Health and Environment sent the following statement regarding the video:

“We had a regular inspection at Mt. Fuji on 8/20. Our inspector noticed 40-50 rodent droppings in the sushi bar area, liquor cabinets, the floor around the sushi bar ice machine and under the cooler. They were ordered to take care of it. So when our inspector returned on 8/28, he said the violations were corrected. We sent out an inspector again on 9/25 because our team also saw on Facebook that video you guys have. No one filed a complaint. He found zero evidence of rodents. Evidence could include things like: mice droppings, nesting materials, open food packages, live/dead mice. So there were no corrective actions to be taken.”

Mt. Fuji remains open and says the problems will be addressed.

“Everything is fine,” said Enebish. “They checked everything.”

EXPLAINER: Next steps for Finland, Sweden on NATO …

EXPLAINER: Next steps for Finland, Sweden on NATO …

Rebuffed twice, JetBlue goes hostile in its bid for …