DENVER — President Donald Trump has committed to being in Colorado “a lot” during a White House event Thursday.

“We will be in Colorado a lot, actually,” Trump said at a paid family leave event.

VIDEO: Trump commits to being in Colorado "a lot" during 2020. Commits to helping @CoryGardner get reelected. Comments made at a White House event this morning. #copolitics #cosen pic.twitter.com/0vCW1eht9H

“We have a great senator in Colorado, we have to get him extended. I’ll be there a lot,” Trump said about Sen. Cory Gardner.

Trump’s praise of Gardner is helpful for Gardner’s reelection support among Trump supporters in the state. The president is above 90 percent support among the Republican base in Colorado.

The praise is also a blessing for Democrats in Colorado, who plan on connecting Gardner to Trump in an effort to defeat him.

Meanwhile, Trump took time to retweet Congressman Ken Buck Thursday. Buck sits on the House Judiciary Committee and has been critical of the impeachment process. 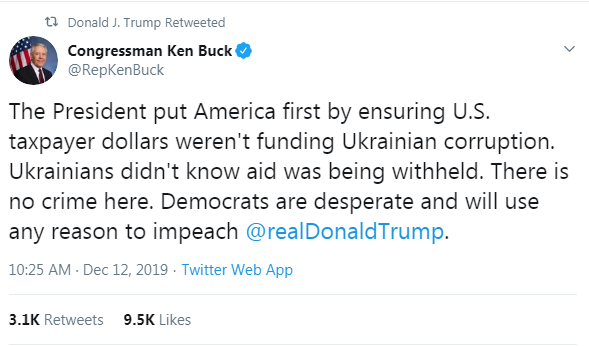 CASTLE PINES, Colo. (KDVR) -- As we go through spring, Colorado Parks and Wildlife says there are ways to attract birds without attracting bears.

On Tuesday, cellphone video surfaced of a sow and her two cubs roaming a subdivision in the Castle Pines area. It was the second time the trio had been spotted in three days.

DENVER (KDVR) -- The state of Colorado has already been through the worst-case scenario for high school athletics, according to Rhonda Blanford-Green, Commissioner for the Colorado High School Activities Association (CHSAA). That worst-case scenario was the sudden cancellation of spring sports.

Based on current information about the pandemic, the chances of canceling high school sports for the next school year are “slim to none,” according to Blanford-Green.

DENVER (KDVR) -- With less than 48 hours' notice, Denver restaurant owners are working around the clock to make sure they’re ready to open their doors to customers Wednesday. But with an emphasis on outdoor dining, the bigger race is applying for and preparing space to expand seating outside.

“Astroturf with standup umbrellas and 10-by-10 tents,” said Blake Street Tavern owner Chris Fusilier as he stood over his parking lot that flanks the restaurant, describing his vision for the space.