CORTEZ, Colo. — Drive down Highway 491 in Cortez, and it’s tough to miss the Antique Corral. The shop is a bit of an antique itself, a popular store attracting tourists and others for several decades.

However, the store’s shelves are also stocked with some controversy.

Shanks was shopping at the store several months ago when she says she stumbled upon several signs she believes were racist in nature, with messages that included “Public Swimming Pool – Whites Only” and “Colored Seating in Rear.” 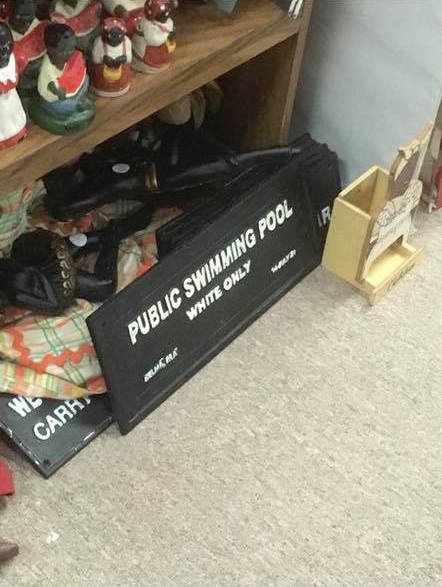 Shanks says she demanded to speak with the owner, but the owner wasn’t around.

After spending several months unsuccessfully trying to reach the owner, Cheryl Dean, Shanks says she decided to stop by the store again. She asked Dean to remove the signs.

“She told me to go back to England where I came from,” said Shanks.

Dean did not remove the signs and says they are not racist in nature. She also tells FOX31 she’s been selling them for years without complaint.

“I’ve lived in a small town my whole life. I don’t even know what the word means. There’s been black people in the store and we laugh about it. There’s people that collect that stuff. It has nothing to do with racism. It’s part of history, like, ‘Look how far we’ve come’,” Dean said.

“That’s the thing she says over and over: ‘It’s history. You’re trying to erase history.’ I shared with her that history belongs in a museum and that these things are made for profit and you’re profiling a very horrible time in this country’s history,” said Shanks.

The dispute has now taken on a life of it’s own. Hundreds of people are now vowing to boycott the store and are bombarding the business with negative reviews online.

Shanks says she doesn’t condone violence, but she says she does support the First Amendment and is vowing not to let up. She says her 11-year-old daughter is African-American, so the decision not to remove the signs is even more personal.

“It still doesn’t make me angry. It makes me sad because it shows me how utterly emboldened and entrenched she is in her belief system that she utterly can’t see how it affects others,” said Shanks.

“I don’t have any regrets at all. Not at all. I never thought anything about it. It’s just crazy how so few people can cause one person so much misery,” said Dean.

Dean says all of the signs sold in the past couple of days because of all the publicity. She also says she does not plan to purchase any more of them for her store.