ANTONITO, Colo. – A  New Mexico man’s social media post is gaining a lot of attention. Michael Garcia, a fishing guide, reportedly filmed his dog attacking and killing a fawn. He then called it a “big game kill” on Instagram.

Colorado Parks and Wildlife says it is actively investigating the incident.

“Unethical on his part and un-remorseful,” said Clint Lockhart, one of many Coloradans outraged over the Instagram post.

In Garcia’s post, which has since been deleted, a caption reads: “Gus provided the best action at the end of the day. Got his first big game kill.”

Lockhart grew up hunting and fishing and says he was taught to respect animals.

“If one my dogs were to start attacking something, I sure as heck am not going to have the time to pick up my phone and approve of his behavior,” Lockhart said.

The picture that is causing the most controversy shows that the fawn has been skinned.

“The worst thing about it is that he dresses this fawn. Which is… skins it and lays it out afterwards. He bragged about it,” Lockhart said.

FOX31 and Channel 2 made several attempts to get a hold of Garcia. We also called Conejos River Anglers, the company where Garcia was contracted as a fishing guide. A spokesman described the incident as an unfortunate situation.

The spokesman said the company does not condone what happened in Garcia’s video. Conejos River Anglers said they now plan to let Garcia go because of the post. His photo and biography have been removed from their website.

While CPW says it cannot comment on the case, it says illegal killing of wildlife is a serious crime.

“I just want knowledge out there about this and for him to get in trouble for it,” Lockhart said.

CPW officers say it is illegal to harass wildlife. They want to reiterate for everyone to leave baby wildlife alone and to keep dogs on leashes.

On Monday night, Garcia posted the following statement to Facebook: 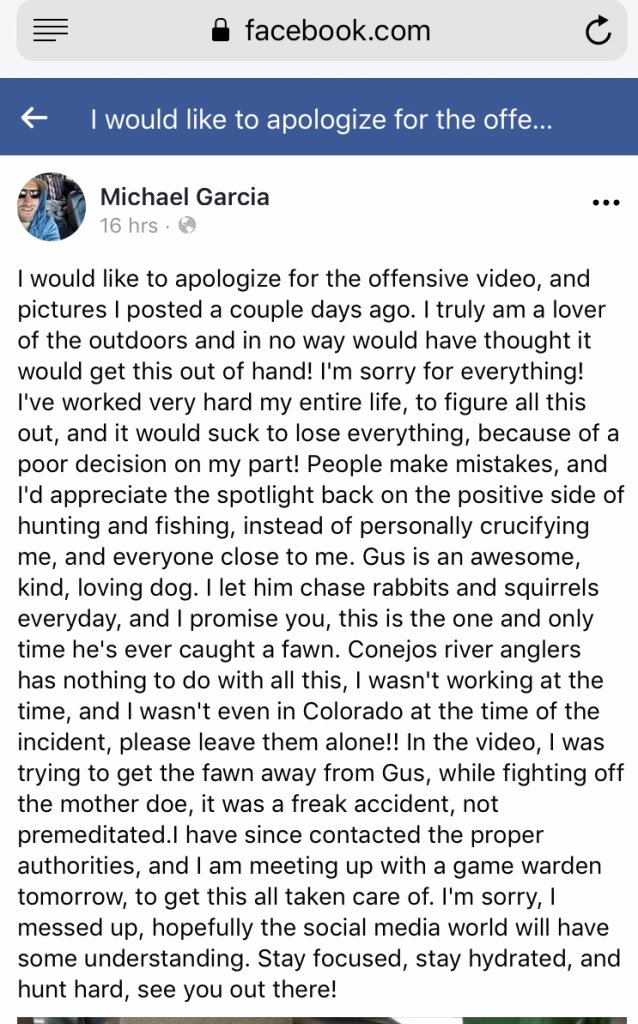 Renters deal with heat issues ahead of freezing cold

How much can you make working at Casa Bonita?