DENVER — Colorado officials, trade associations and taxpayers made a big commitment to bring the Outdoor Retailer show to the Denver Convention Center in 2017. 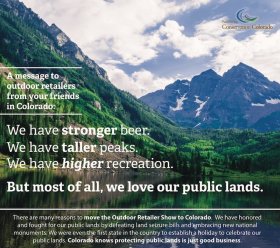 Conservation Colorado took an ad out in the Salt Lake Tribune to try and lure the multi-million dollar event from Utah.

Since 2018, the group has hosted three major conventions each year in downtown Denver. Each had an economic impact of over $40 million for the area.

But this week it was announced the November show would be combined into the January show, leaving just two events for the year.

This week Gov. Jared Polis was asked if taxpayers should get a refund.

“We will look at any option of course,” Polis said.

But Polis added, “I will emphasize the trade show has a huge benefit to our area.”

Sources told FOX31 it is unlikely the state would request a refund since the organization is still hosting two major events each year.

But the news is not sitting well with some restaurants near the convention center who rely on business from major conventions.

“It is bad news because it is probably going to mean less business for us,” Jennifer Juarez, a manager at Uncle Joe’s Hong Kong Bistro, said.

DENVER (KDVR) -- A Medina Alert has been issued for a 2003 grey Acura sedan with the license plate BID546. Police say the car has pink or orange wheels with possible front end damage.

The car is linked to a serious injury crash that happened on Interstate 25 and 20th Street. The vehicle was last seen around 37th Avenue and Vallejo Street.

DENVER (KDVR) -- Get your walking or running shoes ready! St. Jude Children’s Research Hospital’s virtual exercise campaign is underway. Walkers, runners, hikers and skippers are all welcome, according to the hospital.

September is Childhood Cancer Awareness Month. COVID-19 is changing how the Tennessee-based hospital is spreading that awareness.