CHAFFEE COUNTY, Colo. — Investigators from local and federal agencies said they believed they found the remains of a woman who disappeared from Salida nearly 40 years ago.

The area of the recent search is the same place where some of England’s bones were discovered in 1992.

The sheriff’s office worked with the Salida Police Department, the Chaffee County Coroner’s Office and the FBI.

The remains will be sent to a pathology lab at the University of North Texas northwest of Dallas, where they will be analyzed for identification.

“There were several remains that displayed possible damage and this could possibly reveal a cause of death,” the sheriff’s office said.

Court documents include multiple witness interviews from the past 20 years that connect the dots to a now 66-year-old woman named Mitzy Abeyta.

According to law enforcement investigators and relatives of England and Abeyta, it was well known that England had been having an affair with Abeyta’s husband Steven Abeyta, at the time of England’s disappearance.

England told her baby sitter that she was going to meet with Mitzy Abeyta one-on-one despite the baby sitter warning England not to do that.

A family friend told investigators that England planned to end the affair with Steven Abeyta.

Another witness told police that England and Mitzy Abeyta were seen together at a doughnut shop the morning of England’s disappearance. 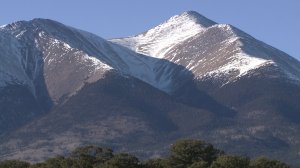 England’s husband found his wife’s car at Riverside Park with her purse and shoes still inside on the afternoon of June 12, 1980, but the case soon went cold.

It would be another 12 years before human bones were found in a ravine at the base of Mount Shavano.

But the remains found in 1992 were sent to a Colorado Springs coroner who mistakenly believed they were from the  Frontier Era and did nothing with them.

It was not until 2015 that DNA proved the bones were those of Beverly England, which convinced the Chaffee County Sheriff’s Office and Salida police to  reopen the case.

COLORADO SPRINGS, Colo. -- The father of Christopher Abeyta, the 7-month-old boy who disappeared from his Colorado Springs home in 1986, has died, family members said.

Gil Abeyta died after a heart attack, according to his daughter, Denise Alves.

PUEBLO, Colo. -- Pueblo officers fatally shot a woman who broke into a home and then got into a confrontation with them Tuesday night, according to the police department.

Police said around 10:30 p.m., they got a call about a home invasion on West 15th Street near McMillian Street. The caller told police an armed woman went inside the home and threatened people inside.

DURANGO, Colo. (KDVR) -- A young black bear burned in the East Canyon Fire two months ago is doing much better.

"The bear had his bandages removed and is continuing his healing process at our Frisco Creek Rehabilitation Facility! Here is a short video of some footage caught by the game camera placed in his outdoor outdoor facility. After the bear is fully healed, he will be released back into the wild!" shared Colorado Parks and Wildlife in Durango on Monday.

How Biden chose Harris: Inside his search for a running mate