DENVER — Internal emails from the state’s Division of Fire Prevention and Control reveal how the agency handled media inquiries and tips from the public during a search for drones flying in northeastern Colorado.

The department released more than 100 pages of documents to the FOX31 Problem Solvers after we made an open records request for emails written during late December and early January, containing the word “drone.”

The request led the agency to issue a public statement confirming its involvement in the drone investigation.

“FOX31 just submitted a (Colorado Open Records Act) request to DFPC for all emails with the word Drone for the four days surrounding the investigation, so we would like to put out this statement to media tomorrow in order to stop the rumors,” said an email drafted by Patricia Billinger, a spokesperson for the Colorado Division of Public Safety, a department which includes the DFPC.

The Jan. 9, 2020 statement to which Billinger was referring publicly acknowledged the agency’s Multi-Mission Aircraft had flown in an area where suspicious drone activity had been noticed.

FOX31 first reported those details on January 7, 2020 even though the agency would not confirm that the plane had assisted in the investigation.

A prior email from the agency’s director, Mike Morgan, revealed his initial desire to be cautious with comments to the public when discussing DFPC’s involvement in the drone search.

When asked about the following prepared statement to the media, he acknowledged its vagueness by writing, “I think this is as ‘fuzzy’ as we can be while being honest about it.”

While we’re actively investigating, we typically do not discuss the investigative techniques or technology we’re using. We are using the expertise and resources of our divisions to assist our local and federal partners in this investigation. We are actively monitoring reports of suspicious activity and will take action based on the level of activity and information being gathered by the CIAC.

The FOX31 Problem Solvers asked for clarification on Morgan’s comments about the message being “fuzzy.”

“As an agency we do our best to maintain transparency and honesty with the community; we were as transparent as we could be without compromising the integrity of the investigation,” said Caley Fisher, a spokesperson for the department.

Ultimately, the agency flew the state’s Multi-Mission Aircraft in an area where drones had been reported during two January missions.

The emails also revealed that the state paid for a hotel room and some overtime during the mission. Fisher said one hotel room for one night cost the state $119, and the overtime for three people totaled approximately $309 before tax.

The FOX31 Problem Solvers also obtained maps showing possible locations of drone sightings and information about the people who reported seeing them. The maps also contained markers representing power substations, power plants, pipelines and missile sites, “anywhere we think the drones should not be flying,” wrote Brad Schmidt, a wildland fire projects manager in an email related to training for the “drone hunt.”

Fisher noted that the data on the maps were from “an earlier collaborative map and is not entirely accurate.” 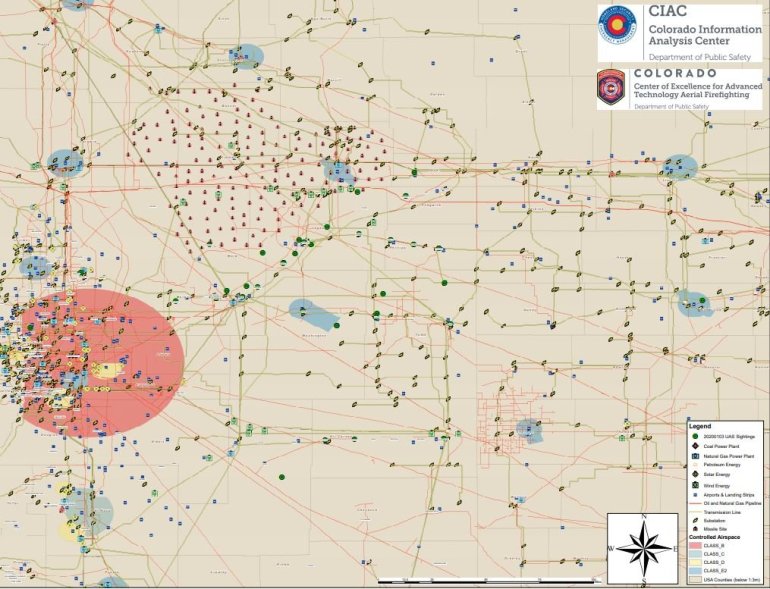 According to Fisher, CDPS is continuing to investigate drone sightings. She said people are encouraged to report those officially through this website.

How big an earthquake is possible in Colorado?

How to help Turkey after the earthquake

Coloradans struggling during the Adderall shortage

Britcoin? UK gets closer to launching a digital currency