AURORA, Colo. — A teacher at Overland High School has been placed on leave for an investigation of allegations that he created a negative, harmful learning environment for students.

The Cherry Creek School District says Jay Bennish is accused of using offensive and racist language with students that created an environment where students did not feel safe and free to learn.

Bennish says two African-American females came to him at the beginning of the school year wanting permission to use the “N-Word” and the “B-Word” at club events. He said, “No, it would violate district policy.”

According to Bennish, the students argued that the N-Word as well as the B-Word were always positive terms when used by African-Americans and women,  respectively.

“I informed them that I could not as a club sponsor and a teacher sponsor a club that was going to promote that kind of language being used at school,” said Bennish. “It’s my role as a teacher to uphold district policy regarding civil discourse and language. These are things that are generally not accepted by professional circles and civil society. I felt like I needed to make sure that I informed them clearly that those types of words were not appropriate for use in school.”

The district placed Bennish on paid administrative leave Aug. 27 with a letter stating he was being suspended for “alleged inappropriate conduct” but the letter did not specify what the conduct was.

“Jay was simply upholding that policy and so that’s why this is such an injustice,” said attorney Tyrone Glover, who is representing Bennish along with the Lane, Kilmer, Newman law firm.

Glover said the district is lying about why it has spent $40,000 in salary so far to keep Bennish home.

“I can’t imagine that the principal and the district would take the position that I should’ve said yes to these students and encouraged that type of language to be used at a school setting,” said Bennish.

After the FOX31 Problem Solvers reached out to the Cherry Creek School District this week, it sent a letter home to Overland High School parents Wednesday morning confirming Bennish had been placed on paid leave.

The letter states, “these allegations include whether Mr. Bennish used the ‘N word’ in his classroom and acted inappropriately as the adult sponsor of the Black Student Alliance.”

Bennish and his attorneys deny that he ever used offensive language or acted inappropriately.

“There is certainly nothing accurate that’s being presented or represented,” said Bennish.

The district says they found that Bennish distributed a T-shirt that displayed derogatory, racist images and language during the investigation.

“I’m honestly just disappointed and shocked that anything like this is happening around our community,” said Jade Jones, who graduated as the high school’s vice president of the Black Student Alliance in 2017.

Jones said students in the club — not Bennish — created and distributed the T-shirts, which included words on the front that said, “Who You Calling N****?!”.

Jones said she first created and ordered the shirts during the 2016-2017 school year and the message was supposed to be positive.

“It’s supposed to be that – we want to be called as an actual human being and not as this term (the N-word),” she said.

“There was a lot of blowback from administration all the time,” said Precious Jarrett, who was the president of the Black Student Alliance in 2018.  “We would wear the shirt. It was just an empowerment movement kind of thing. Like, you can’t silence our voices,” she said.

Bennish says the shirts were designed to empower African-American students.

“To overcome the stereotypes and caricatures that have been forced upon them through hundreds of years of misrepresentation and racism,” said Bennish.

Jarrett is now a student at the historically black university, Howard University, in Washington, DC, where she studies political science and African-American studies. She also started a change.org petition three months ago to reinstate Bennish. So far, nearly 600 people have signed it.

“The club was student-ran, like everything we did was our ideas. Our thoughts. (Bennish) was just there as a supporter because we needed a supporter for the group to stay open,” she said.

“He really let the students lead the club. He stepped back and was there only if you needed support,” she said.

Jarrett said the district’s delay in resolving the investigation into Bennish is “definitely very sketchy. I feel like that’s a lot of time to fabricate evidence – to go around and get your story straight.”

“I think they’ve been out to get him for a while,” she added.

The Cherry Creek School District sent out a letter to parents at Overland High School on Wednesday: 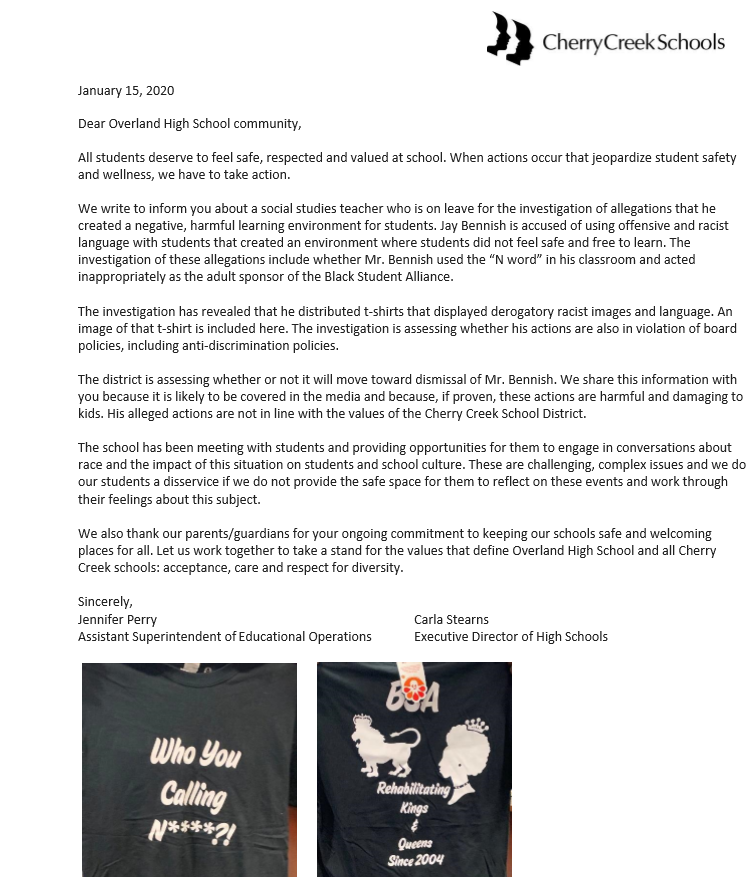 Bennish calls the letter a “complete misrepresentation and fabrication of the truth.”

“It was pretty clear that they were looking and searching for something to try and remove me as a teacher,” said Bennish.

The Problem Solvers learned this isn’t the first time Bennish has been suspended by the district. In 2006, a student in a geography class recorded a discussion in which Bennish compared remarks by former President George W. Bush to speeches from Adolf Hitler.

Bennish’s attorney David Lane was also his attorney in 2006. He says the previous suspension was a “First Amendment free speech violation” and Bennish was only out of work for a couple of weeks.

Bennish’s attorneys say if this situation continues to be drawn out, they are prepared to file a federal lawsuit.

BOULDER, Colo. (KDVR) -- The Boulder Police Department said on Saturday that there were no incidents reported at a protest that was held in response to the death of George Floyd.

George Floyd, a black man, died in police custody Monday, after a now former Minneapolis police officer, Derek Chauvin, knelt on Floyd's neck for over eight minutes. Floyd repeatedly said that he could not breathe. Chauvin would later be charged with third-degree murder and manslaughter.

The CONG personnel will be additional and separate to those already aiding in the COVID-19 response. That effort will not be affected.

DENVER (KDVR) -- Denver mayor Michael Hancock has issued a curfew for 8 p.m. Saturday as protests in the city for the death of George Floyd continue for a third day.