DENVER — The National Western Stock Show parade will lead to street closures and RTD disruptions in and around downtown Thursday.

The parade begins at noon outside Union Station (Wynkoop and 17th streets). The route proceeds in a straight line southeast down 17th before concluding at Tremont Place, just short of Broadway.

Once the parade ends, participants will take Tremont to 15th to Wynkoop to return to the staging area at Union Station. 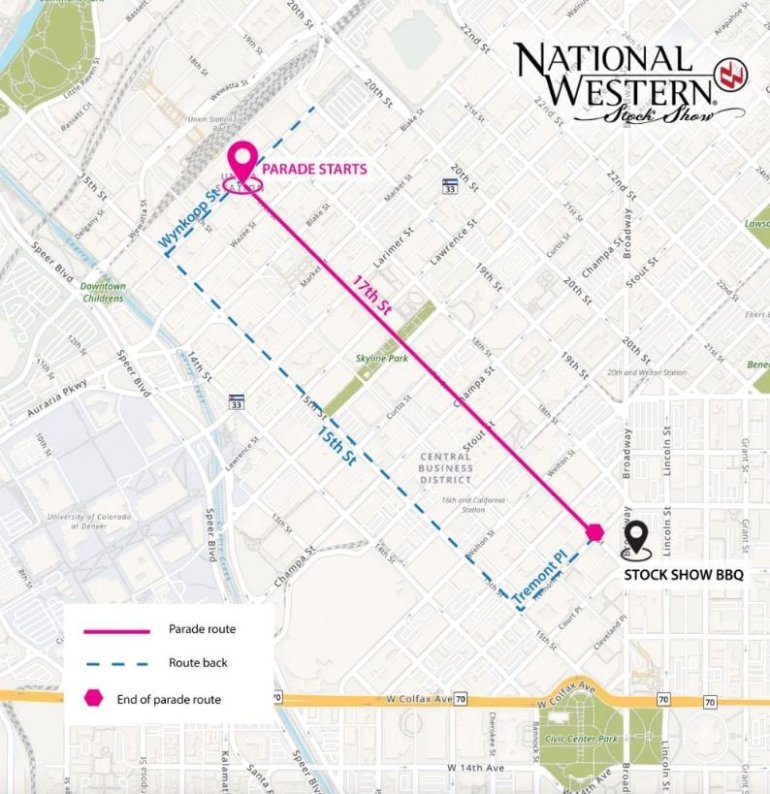 The RTD bus routes below will be affected by the parade:

Services will resume as the parade clears, RTD said.

Thirty longhorn cattle will walk down the parade route.

“Kids, families, business men and women get to step back in time and see a true western cattle drive with horses, cowboys, cowgirls, tractors, marching bands and floats,” the stock show said on its website.

Jake Jabs, the president and CEO of American Furniture Warehouse, is the parade’s grand marshal this year.

NORTHGLENN, Colo. (KDVR) -- Northglenn police report a man was assaulted by another man in a parking lot on 120th and Washington Street on Friday evening.

The victim arrived at the hospital with visible injuries, according to NPD. He told NPD officers that a man in a Toyota FJ exited his car, assaulted him and discharged a firearm.

MESA COUNTY, Colo. (KDVR) -- Evacuations and pre-evacuations have been announced online and personally delivered to residents near the Pine Gulch Fire outside of Grand Junction on Saturday.

According to the Garfield County website, a small number of residences have been evacuated on County Roads 200 and 202 via in person notifications. For safety reasons, electricity was shut off at the evacuated residences.

DENVER (KDVR) -- Four people were injured in an apartment fire at 630 S. Dayton in the Windsor neighborhood Saturday afternoon. The fire was quickly extinguished by the Denver Fire Department.

According to DFD, three people were transported from the scene.

Thousands of children get free school supplies, thanks to Packz 4 Kidz

Stimulus check update: Why we’re no closer to a second $1,200 payment

Tear gas, clashes in Beirut amid fury over massive blast