by: The Associated Press

CORTEZ, Colo. — A pair of massive boulders rolled off a Colorado mountainside and smashed into a highway, destroying the pavement and leaving a house-sized rock across the roadway that will have to be blasted apart, state transportation officials said Saturday.

The highway is closed indefinitely, according to the San Miguel Sheriff, as crews removed unstable and loose rock to prevent another fall.

A photo posted by the City of Ouray showed a person posing in front of one of the boulders, which appeared as big as a two-story house. The other large boulder carved an 8-foot trench as it went over the roadway. 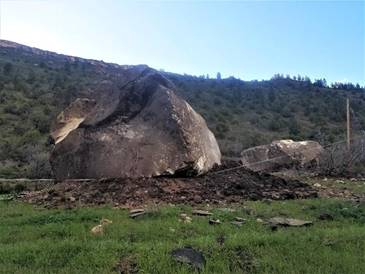 It’s relatively common for boulders and smaller rocks to fall on mountain highways, particularly in spring after the repeated melting and freezing of snow and ice creates new fissures on mountainsides.

But Friday’s afternoon rock slide along state Highway 145 between Cortez and Telluride was unusual in that it began about 1,000 feet above the highway , in a cliff band at the top of a slope leading down to the highway. 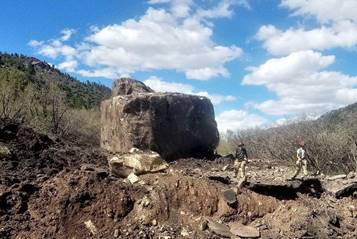 Once the slope above is deemed safe, crews will seek to build a shoulder along the damaged roadway so at least a single lane of traffic can be opened, Schwantes said.

New Zealand to help pay for cleaner cars to reduce …

New Zealand to help pay for cleaner cars to reduce …

India open to exporting wheat to needy nations despite …

Motorcyclist killed in collision with truck

Warmer week ahead with shower chances

Motorcyclist killed in collision with truck