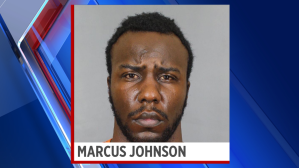 CENTENNIAL, Colo. — The man accused of shooting and killing a neighbor over a parking space dispute made his first court appearance on Tuesday morning.

Marcus Johnson, 31, faces first-degree murder charges in the shooting death of T.J. Cunningham, a former University of Colorado football player and an assistant principal at Hinkley High School in Aurora.

Johnson appeared in an Arapahoe County courtroom for an initial advisement. He is being held without bond and is due back in court on Friday morning for the filing of charges.

Johnson has a criminal history that includes assault and a weapons possession charge.

According to a probable cause statement, Johnson and Cunningham lived across the street from each other and had an ongoing dispute over a parking space.

On Sunday morning, Cunningham and Johnson agreed to meet at Eaglecrest High School to “box it out.”

According the statement, the situation escalated to the point that Johnson allegedly shot Cunningham three times, hitting him in the head and chest.

Cunningham was not armed. He was taken to Parker Adventist Hospital but died on Monday.

Johnson then went home after the shooting, called 911 and said he had “just shot his neighbor,” according to the statement.

Arapahoe County sheriff’s deputies arrested Johnson at his home on suspicion of attempted first-degree murder. A handgun was found in his vehicle.

After Cunningham died, the charge was upgraded to first-degree murder.

“I expect him to remain in place,” 18th Judicial District Attorney George Brauchler said. “There isn’t any amount of money on the planet Earth at this moment that could get him out of custody.”

Cunningham played receiver and defensive back for CU from 1992 to 1995 after starring at Overland High School in Aurora.

He finished with 21 receptions for 239 yards as a receiver before switching to defensive back in 1995. He played in four bowl games with the Buffaloes.

He was taken in the sixth round of the NFL draft by the Seattle Seahawks in 1996.

He played nine games in 1996 with the Seahawks before injuries ended his career.

A GoFundMe page has been set up in Cunningham’s name.