GREELEY, Colo. — One of the biggest pests in metro Denver has found its way to Greeley, according to curators at the Denver Museum of Nature and Science.

The Japanese beetle has been thriving in Boulder and Denver suburbs since the 1990’s, but has remained relatively contained, until now.

“Yesterday I went to Greeley because I heard they were in Greeley,” said Frank Krell. “I took a trap, a Japanese beetle trap with me, and when I came back an hour later, over 50 beetles were in the trap.”

He said its the first time the species has been documented in Weld County.

“That shows there’s an established population there, and that they are there in high numbers,” he says.

The beetles, while pretty to look at it, can be quite destructive to ornamental gardens and plants.

The larvae thrive in watered, manicured lawns. The adults eat roses and other soft, leafy flowers from June through September, before beginning the cycle again.

The beetles are not abundant in the mountains, or on the eastern plains, due to a lack of lawns.

Krell says pesticides are ineffective, and only hurt other, native insects.

He says the best option is to pick them by hand, and drown them in soapy water.

If you live in one of the areas below without a black dot nearby, he’s asking for you to send your beetle sample to the Denver Museum of Nature and Science, to better track their movement. 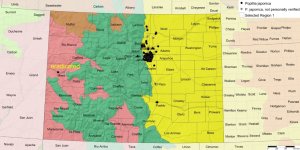