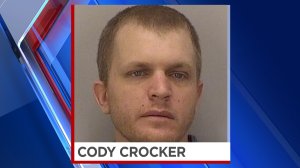 CASTLE ROCK, Colo. — An inmate was captured after entering the ceiling of the Douglas County Detention Center, leading to a lockdown on Tuesday morning.

A perimeter was set up by the Douglas County Sheriff’s Office and the Castle Rock Police Department after the inmate, 34-year-old Cody Crocker, entered the ceiling.

Less than an hour later, the sheriff’s office said Crocker was found unharmed and removed.

He will be examined by medical staff and be placed back into a cell.

Crocker was being held at the detention center on charges of attempt to influence a public servant; forgery, simulation impersonation and related offenses; shoplifting; and possession of drug paraphernalia.

He was booked into the detention center by the Lone Tree Police Department on Feb. 5 and was being held on a $100 bond.

It’s not known how Crocker was able to get into the ceiling.

DILLON, Colo. (KDVR) -- On Monday, Arapahoe Basin posted on social media saying that due to high demand they are not able to take any more reservations this evening, but anticipate being able to do so on Tuesday.

The ski area also said to remember that skiers can only reserve one day at a time.

CASTLE ROCK, Colo. (KDVR) -- On May 22, the owners of C&C cafe, who reopened their restaurant on Mother's Day despite public health orders, are suing the Colorado Department of Public Health and Environment, the Tri-County Health Department and Gov. Polis.

In the document submitted to the court, it states that the numerous public health orders delivered by the state change almost weekly. Because of this, the owners feel that remain in limbo and a state of uncertainty.