COMMERCE CITY, Colo. — A Commerce City middle school teacher has been placed on administrative leave after he allegedly typed out an inappropriate message to students this week.

“Silent reading … I want to kill children but I am a loving Christian man who never would hurt a flee (sic) so please sit down and read,” the eighth-grade teacher, identified by parents Kris Burghart, at Otho E. Stuart Middle School, allegedly wrote. 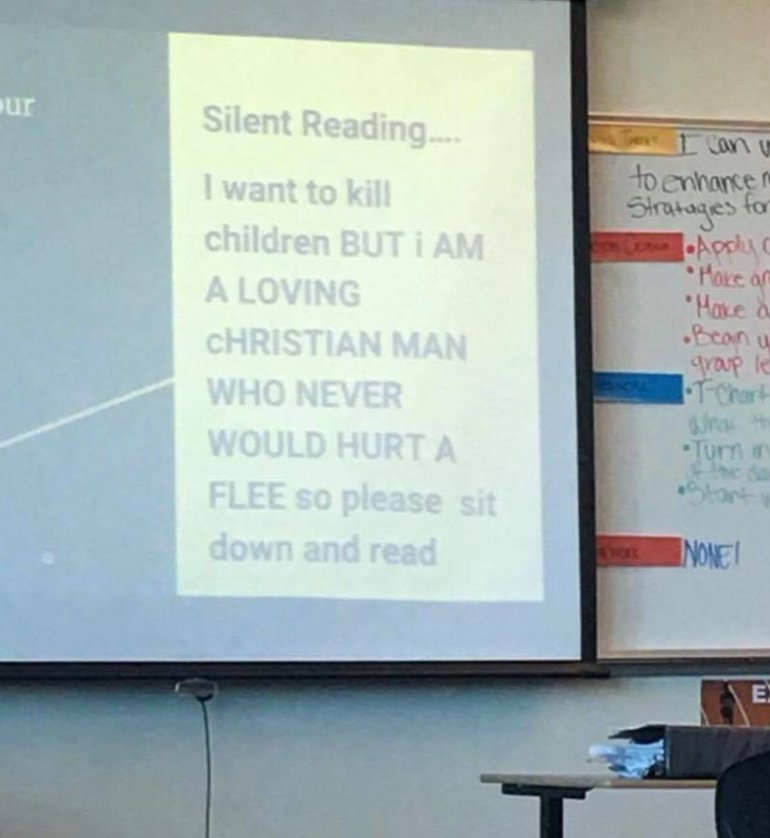 Principal Fabricio Velez told parents in a letter that students were never in any danger. The teacher began the administrative leave on Tuesday, according to a School District 27J spokesman.

“I wanted to make you aware of an incident that took place yesterday during Connect 21 (last period of the day) in Mr. Burghart’s class. It was reported to me by a parent last night that Mr. Burghart had a message projected on the board that frighten some of our Raptors.

Please know that we take any allegations concerning the safety and security of our Raptors very seriously. I can assure you that your student was not in danger at any time,” Velez said. “I will communicate back to you once my investigation is completed.”

“We all have bad days, but as a person in a position of trust with our students, it doesn’t matter how bad your day is,” a parent said. “You don’t speak that way. You don’t write that way.”

While some said the message should be taken as more of a joke, the school district said it is taking the situation seriously.

“Our human resources department is aware of the situation and the teacher in question has been placed on administrative leave, pending an investigation,” School District 27J spokesman Tracy Rudnick said in a statement. “The safety and security of our students is our No. 1 priority.”

More than a dozen parents voiced support for Burghart.

“[He is] the most supportive teacher for any of the kids in this school,” a parent said.

Other parents called the teacher an asset to the community, to the school and fellow teachers.

“He’s the greatest teacher at this school in my opinion,” another parent said.

Attempts to reach Burghart at his home on Tuesday were unsuccessful. Some community members are expressing doubt over the accusations that Burghart wrote the messages.

Man mooned others, threw can on flight: court docs

(The Hill) – Prosecutors said a Delta Airlines passenger who refused to wear a mask during a flight exposed himself to other passengers and threw a can at an individual, The New York Times reported.

In a case unsealed on Friday, Shane McInerney of Galway, Ireland was arrested and charged with intentionally assaulting and intimidating a crew member during a flight earlier this month.

NORTHGLENN, Colo. (KDVR) -- The Northglenn Police Department is searching for a suspect who threw an officer to the ground while trying to elude police.

It happened around 10:30 p.m. Saturday night in the 10700 block of Acoma St. Police received reports of two suspicious men in a truck with a possible weapon.

All 100 monkeys found after escaping in truck crash

Over 100 Afghans re-settle in Colorado thanks to Team Rubicon

Funding for lost wages due to Marshall Fire now available