DENVER — Gov. Jared Polis is encouraging an independent investigation into the shooting death of a Colorado Springs teenager, who was fatally wounded while running away from officers responding to a burglary report.

Heading down to Colorado Springs this evening. We'll carry a press conference with De'Von Bailey's family live on @KDVR at 5:30. https://t.co/RBJjryY5TP

The family of 19-year-old De’Von Bailey has also called for an independent investigation of the events that led up to Bailey’s death. Additionally, more than 2,000 people in Colorado signed a petition asking for a similar review.

Colorado Springs police have said an officer shot the teen after he reached for a gun.

The video posted online by the The Gazette shows Bailey running from the two officers who appear to be white and enter the frame with their guns drawn.

Bailey quickly falls on his side and leans on his left arm. The officers run to him with guns still drawn, roll him to his stomach and cuff his hands behind his back.

About a minute later, another officer arrives and kneels down, appearing to help the other officers remove Bailey’s shorts.

About four minutes after the shooting, officers rolled Bailey onto his back and one began chest compressions. A firetruck arrived about three minutes later and blocks the view of the surveillance camera.

A police official says two Colorado officers put on leave after the shooting have returned to active duty.

Sgt. Alan Van’t Land and Officer Blake Evenson were placed on leave after the Aug. 3 shooting. 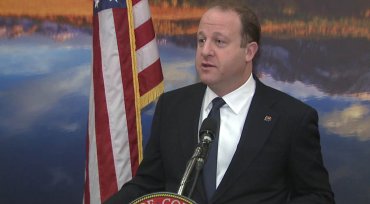 In a statement released to the public by Polis, the governor acknowledged an independent investigation would “ensure the public’s confidence in the results.”

The full statement can be found below:

“Our nation is grappling with difficult challenges concerning race and how we treat one another. It is more important now at this moment in time that our law enforcement agencies go above and beyond to maintain public trust and confidence,” said Governor Jared Polis.

“Fairness and objectivity are key to ensuring the public trusts the integrity of any investigation. Given how the events have unfolded surrounding the death of De’Von Bailey — the public details and video that have been shared and the questions that have been raised by the general public — I hope that El Paso county takes steps above those legally required to additionally maximize the public trust in the investigation.

“I personally believe Colorado Springs residents would be best served by an independent review of the events surrounding De’Von Bailey’s death. An independent review would ensure the public’s confidence in the results, and maintain trust in law enforcement going forward. I encourage the El Paso County district attorney’s office to consider turning the investigation’s findings over to another local jurisdiction for independent review, and if warranted, additional information gathering.”

Semi-truck hits pedestrian, portion of I-25 closed near University Avenue

DENVER (KDVR) -- A crash involving a semi-truck and a pedestrian closed a portion of Interstate 25 on Thursday afternoon.

Denver police said the crash happened in the right lane of northbound I-25, just north of University Avenue around noon.

Gannon’s stepmother, Letecia Stauch, reported the boy as a runaway on January 27, when she said he didn’t return from a friend’s house.

COLORADO SPRINGS, Colo. — A man is dead after a shooting in the drive-thru area of a Colorado Springs Carl’s Jr. Thursday morning.

Police said the shooting happened around 3:30 a.m. at the restaurant near the intersection of Powers Boulevard and Galley Road. Police said an off-duty officer was in the drive-thru when a man approached and said he had a gun. The officer fired at least one shot, hitting and killing the man.

Semi-truck hits pedestrian, portion of I-25 closed near University Avenue

Warm before the storm: Seasonal temps, sunshine before snow Sunday