DENVER — During a press gaggle during at an event in downtown Denver on Thursday, Sen. Cory Gardner refused to say whether it is appropriate for a president to ask a foreign leader to investigate a political rival.

Gardner was repeatedly asked the same question by journalists based in the Denver area.

“You’ve called it a partisan circus but I haven’t heard you answer this question: Do you believe it’s appropriate for the president of the United States to ask a foreign leader to investigate a political rival — yes or no?” Gardner was asked.

Breaking: @SenCoryGardner refuses to answer question whether it is appropriate for the President to ask a foreign leader to investigate a rival. Quite the exchange in Denver #copolitics #kdvr pic.twitter.com/5Y0EYOcKjM

“This is what we are going to get into,” Gardner said. “The Senate intelligence committee is having an investigation — a bipartisan investigation. Unfortunately, what we have seen is a very political process take over.

“If you look at Al Green in Texas, a  member of Congress has said, ‘We need to impeach President (Donald) Trump now because we might not win in November.’ That’s about politics. That’s not what a serious investigation should be about.”

“But is it appropriate?” Gardner was asked.

“I have answered your question,” Gardner said.

Another reporter jumped in and asked the same question.

“Well, here is what you see in the House of Representatives. You see a very partisan process take place,” Gardner said. “Why is it when you all do stories, when we see reports in the news, it’s about four states: Colorado, Arizona, Maine and North Carolina.

“It seems to be about politics and the election other than the serious process that it is.”

On Thursday afternoon, President Donald Trump liked a retweet of a video of the exchange that was originally tweeted by FOX31 political reporter Joe St. George. 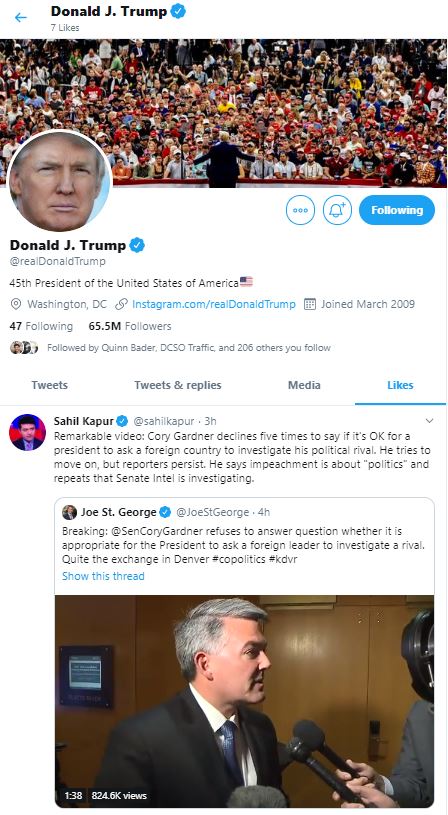 ‘He ate some fermented apples’: Bear breaks into …

US vows to supply green-fuel-laggard Japan with bioethanol

How much rain did the Denver metro see Monday night?