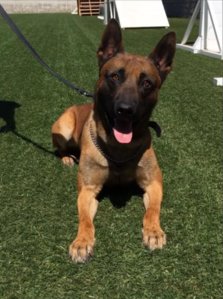 Ivo began working with Fort Collins police in December 2017 as a dual-purpose K-9 trained in patrol work and narcotics detection.

“The bond between a handler and K-9 is significant,” said Sgt. Sean Giddings, who leads the K-9 Unit. “This morning’s display of support from our first responder partners and CSU veterinary staff was a fitting tribute to an unforgettable dog.

“Though his life was short, he served our community with distinction.”

DENVER (KDVR) -- After what seems like non-stop snow this month, you might be hoping mother nature help melting some of it away. However, with the constant change in temperature, it could spell disaster for your roof. The Ice Dam Guys speak with FOX31's Ashley Michels about way to prevent severe damage to your roof and house during the icy and snowy conditions Colorado has been seeing.

The south side of the Colorado State Park remains heavily drifted in with snow and ice, the Facebook post states.

Just a few days after Denver Mayor Michael Hancock vetoed a measure that would have ended the city’s longstanding ban on pit bull ownership, Gov. Polis posted this photo of a pit bull rescue pup at the Governor's mansion Sunday night.