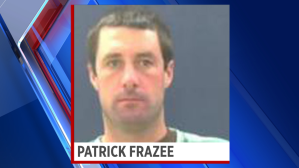 WOODLAND PARK, Colo. — The fiance of a missing mother who has not been seen since Thanksgiving was arrested and held for investigation of first-degree murder on Friday morning, the Woodland Park Police Department said.

He appeared by teleconference at a Teller County District Court hearing.

Frazee was arrested earlier Friday in the disappearance of 29-year-old Kelsey Berreth. Authorities say he faces charges of first-degree murder and solicitation of murder.

A public defender was appointed for Frazee.

A judge set Frazee’s next court appearance for Dec. 31. He’s being held without bond.

Frazee was earlier said to be cooperating in the case of 29-year-old Kelsey Berreth, who was last seen on Nov. 22 at a grocery store in Woodland Park, northwest of Colorado Springs. The couple share a 1-year-old daughter.

Police only said that because of multiple interviews, they were able to arrest Frazee. They said they had evidence that led them to believe Berreth was killed inside her home. Additional charges could be filed, officials said.

An official said the arrest warrant that was executed is sealed until the investigation is completed. Frazee was booked into the Teller County Jail and is being held without bond.

The daughter, Kaley, has been taken into protective custody, police said.

ABC News reported that Frazee was seen in handcuffs and police don’t believe Berreth is alive.

Police said at a morning news conference that Berreth’s body has not been found but the investigation has narrowed their search. They did not speculate where the body migh tbe.

Frazee previously told police he last saw Berreth on Thanksgiving when he picked up their daughter, making him the last known person to report seeing her alive.

Police said they have surveillance video of Berreth, a flight instructor, shopping with her daughter that day at a Woodland Park Safeway store.

Berreth’s employer got a text from her phone on Nov. 25, saying she wouldn’t be able to work that week, police said. Frazee also said she texted him that day, but the contents of that text haven’t been released.

Police began searching for Berreth on Dec. 2 when her mother, Cheryl, told police about her daughter’s disappearance.

Berreth’s phone was tracked to a location near Gooding, Idaho, about 800 miles from Woodland Park. It has not been found.

“She’s not the kind that runs off,” Cheryl Berreth said Dec. 10. “This is completely out of character. Kelsey loves her God, she loves her family and friends, and she loves her job. She’s reliable, considerate and honest.”

Frazee released his phone to be searched and allowed officers to take a DNA sample on Dec. 12, his lawyer said.

A search warrant was executed at Frazee’s Florissant property on Dec. 14 by 75 officers.

Authorities said they brought in large equipment to help with the search, but did not say what, if any, evidence they found related to Berreth’s disappearance.

Frazee’s lawyer issued a statement about the search warrant and said his client continues to cooperate with the investigation.

On Thursday night, investigators with the Colorado Bureau of Investigation searched Berreth’s town house again. Investigators said they were making steady progress with multiple leads in the case.

Treadmills arguably offer a better workout in a shorter time, but require greater levels of fitness to get started. Exercise bikes give a more manageable start.

If you’re looking to incorporate light strength training into your workout routine, but dumbbells just aren’t for you, then ankle weights may be perfect.

Yoga blocks add inches and reach where needed, which is just enough to help you acclimate to new or more difficult poses.

Students lost a third of a year’s worth of knowledge

41 degrees below zero recorded in this county