DENVER — A Denver police officer served a six-day suspension last week after failing to find a loaded gun during an arrest in June.

Officer Gordon King would have normally received a 10-day suspension but because he has no prior disciplines and took full responsibility, the Department of Public Safety reduced his suspension to six days. 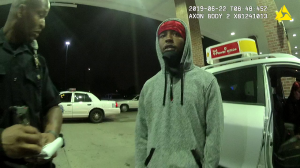 King was responding to a Shell Gas station on Chambers Road June 22 because of a possible robbery. Body camera footage obtained by the FOX31 Problem Solvers shows King detaining 19-year-old Erik Johnson near a gas pump.

The video shows the following exchange:

King: “What do you mean what just happened?”

King: “Because we got a call that somebody walked in and asked if it was OK if they could rob the place.”

King: “That’s why this is going on. That’s why you’re in custody right now because you match the description, OK?” 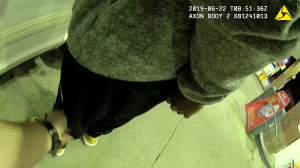 Inside the gas station, the clerk told police the suspect kept reaching along his belt line as if had a weapon. King can be heard asking Johnson, “You got anything crazy on you?”

King said, “I’m going to take everything out just in case. Alright, man?”

Body cam shows King searching Johnson’s waistline and pockets but he never searches below Johnson’s pockets before putting him in a squad car. 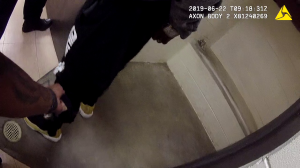 King can be heard telling Johnson on the body cam, “Just don’t want you to have something where you can hurt yourself in the car, know what I mean? It’s not to say I don’t trust you. It’s just that I don’t trust anyone.”

However, it turns out King didn’t follow his own advice in searching Johnson. When a different officer, Clarence Biggs, brought Johnson to the District 5  police station, he discovered Johnson was hiding a loaded gun in one sock and a magazine clip with bullets in his other sock during a pat down in a holding cell. 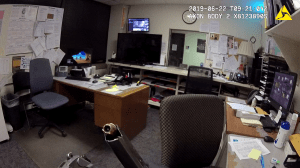 On body cam, Johnson can be heard asking Biggs, “There’s no way you can help me with this thing or do anything?” to which Biggs responds, “Of course not, man. You weren’t open about it to begin with.”

According to the internal affairs report, Biggs had noticed Johnson acting suspicious during the transport because Johnson, “Asked if he could have his hands put in front of him and upon arrival at the station, the arrestee had tried to slip his cuffs and his hands were by his calves.”

King’s discipline letter notes he “placed himself, other officers, employees, and members of the public in danger” by  failing to find Johnson’s .45 caliber semi-automatic handgun before Johnson was taken into custody. 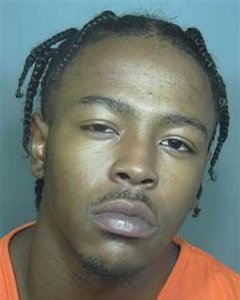 Johnson was never charged with robbery but now faces a misdemeanor for carrying a concealed weapon.

King joined the Denver Police Department in 2017 and served his suspension from Dec. 1st to Dec. 6.

EVERGREEN, Colo (KDVR) - A wildfire is burning in Evergreen, and it has forced the closure of Alderfer/Three Sisters Park until further notice.

The fire was first reported around 2:30 p.m.

DENVER (KDVR) -- Sports betting has only been legal for a bit over two months, and with it being during the COVID-19 shut down of most major American leagues, the list of most wagered upon sport may surprise you.

Not only did table tennis take in the highest number of wagers at $6.1 million, it also had more than four times as much money bet on it than any other sport.

LAKEWOOD, Colo. (KDVR) -- A 27-year-old man was found with a gunshot wound in the Waterfront Apartments parking lot at 10555 W. Jewell Ave. by Lakewood Police officers on Saturday morning.

The man was immediately taken to a local hospital where he died from his injuries.

Protecting your Pets from the Heat