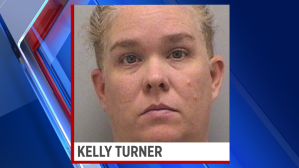 CASTLE ROCK, Colo. — The mother of a 7-year-old girl who was portrayed as having a terminal illness has been arrested and is accused of killing her, according to a grand jury indictment.

After a yearlong investigation by the Douglas County Sheriff’s Office and several other agencies, an 18th Judicial District grand jury returned a 13-count indictment against 41-year-old Kelly Renee Turner for the death of her daughter, Olivia Gant.

Turner was arrested Friday morning at a hotel in Glendale, the sheriff’s office said.

The girl suffered from a terminal illness and in 2017, she was made an officer for a day with the Denver Police Department as well as a firefighter for a day with South Metro Fire Rescue. She died in August 2017.

Turner appeared in a Douglas County court on Monday morning. No bond was set. She’s due back in court on Nov. 1 for a motions hearing and she remains in custody.

“I am extremely proud and impressed with the determination of all agencies involved, especially my detectives,” Douglas County Sheriff Tony Spurlock said.

“While it has been an extremely emotional case, they have investigated all aspects of it with diligence and professionalism.”

It has been this bad before. How home buyers got …

‘No bones’: Noodle the Pug has died