DENVER — A stolen car suspect allegedly caught red-handed in Denver was released with no charges filed.

“We reported it stolen,” said the 34-year-old owner of the stolen red Jeep, who asked to keep her identity protected because she’s upset with the lack of prosecution.

“He was in the car. I don’t know what else you would need as a detective or a cop to press charges against somebody,” she said.

She’s especially upset because the Denver Police Department released the Jeep back to the owner without processing it for evidence.

The victim provided photos she took of the vehicle showing methamphetamine, needles, drug paraphernalia, stolen identifications and credit cards as well as tools that appeared to be stolen as well.

“Us as victims, we shouldn’t have to clean out our vehicle and then let alone find drugs and stolen items,” said the owner, incredulous at everything she found in the Jeep that had only been missing for 24 hours. 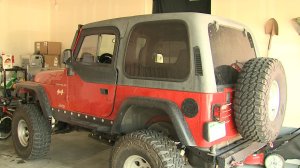 She reported it stolen on Sept. 19 after it was taken from an apartment complex in Greenwood Village.

The next day, police found it at a Circle K at 411 W. Florida Ave., reportedly being driven by Shawn Cannon-McFadden.

He allegedly claimed to have been given the Jeep by someone else.

It’s not clear if police ran a background check on Cannon-McFadden, but if officers had done so they would have discovered he had a $250,000 outstanding warrant in Tulsa, Oklahoma, for vehicle theft.

“I even called Tulsa and verified that the warrant was still active,” the auto theft victim said.

The victim showed a diary left in the Jeep presumably by Cannon-McFadden had a to-do list with items such as “Pick up SMACK” and “Get Shawn a new car,” but “Sex” was listed as the “top priority.” 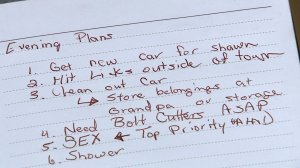 A detective went to the victim’s house on Friday to pick up the forgotten evidence after the victim called to complain. But she’s not optimistic a case will ever be prosecuted.

“I’m sure he’s left the state. If he skipped a warrant in Tulsa, why would he stick around in Denver? He just got a free pass,” the victim said.

Police were asked why the victim’s vehicle wasn’t processed and why the suspect found driving it was released with no criminal charges filed.

“With the additional evidence presented to investigators, the case has been reopened. Once all the new information has been gathered, the information will be forwarded to the DA’s office for further consideration of charges.”

The victim said she plans to filed a complaint with the Internal Affairs Department for the way officers investigated her case.

DOUGLAS COUNTY, Colo. (KDVR) --  A Douglas County mother shared her family’s heartbreak after their 3-month-old baby girl died at an unlicensed home daycare. The child care provider has been arrested and charged with child abuse resulting in death.

Kelsey Matthews is on a journey no parent should ever have to be on. Her baby girl died on Aug. 26.

GRAND COUNTY, Colo. (KDVR) -- A GoFundMe has been set up to assist seven first responders who lost their homes in the fire they were battling.

Ellie St. Germain, wife to Seth St. Germain who is the Assistant Fire Chief of Grand Lake Fire, organized the page to help out "seven first responders that have been working their butts off."

DENVER (KDVR) -- Denver and Boulder are threatening to tighten restrictions due to the status of the state COVID-19 dial. Cases have spiked in both counties over the last week.

Gov. Jared Polis urged Coloradans to step up their game and extended the mask mandate two weeks ago. Positive cases in the state have increased over the past month which Polis said is serious cause for concern.

Ball Arena will open for the last 4 days of voting

Some restaurants take a snow day; others offer warm outdoor space amid pandemic

Moon holds more water in more places than ever thought

Snow brings relief, but not end to Colorado wildfires

Ball Arena will open for the last 4 days of voting