DENVER — The Denver Post apologized Friday morning after photos of the front page of the Life & Culture section went viral.

Under the headline, “The ultimate visitors guide to Coors Field” was a large photo — only it wasn’t the home of the Rockies at 20th and Blake streets in Denver. 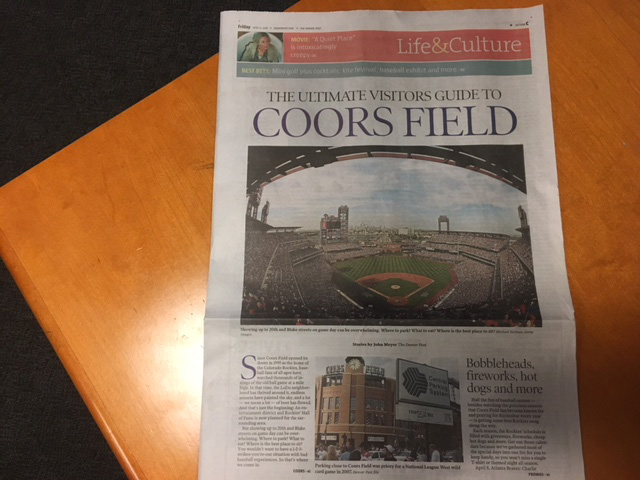 Instead, it was a panoramic shot of Citizens Bank Park, the home of the Philadelphia Phillies.

The photo was a Getty Images shot, not one from its own staff, taken during Game 2 of the National League Division Series between the Rockies and Phillies on Oct. 4, 2007.

The Post said it was a production error. The Post, along with the Boulder Daily Camera, Longmont Daily Times-Call and Loveland Reporter-Herald, has been produced at a design hub in Boulder for the past year.

All of the newspapers are owned by Media News Group.

Due to a production error, an image of Citizens Bank Park ran in place of Coors Field on the cover of today's Life & Culture section. Please enjoy this beautiful image of Coors Field photographed yesterday. The Denver Post sincerely regrets the error. pic.twitter.com/0bwW2snOLb

Deputy sports editor Matt Stephens said the sports staff didn’t see the mistake until after it was printed, saying it was “obviously a bad look.”

The beleaguered newspaper, which has laid off numerous writers and editors the past three years, was roasted on social media for the mistake.

After the Rockies posted a shot of Coors Field ahead of its home opener, the Phillies had a joke at the ready.

What a lovely photo of Citizens Bank Park.

Others didn’t hold back, either.

The ultimate guide to Yankee Stadium. Just check out that NYC Skyline. pic.twitter.com/CdukMtuTQA

Weird how the Denver Post laid off a ton of journalists, then printed a photo of the stadium in Philadelphia with "Phillies" all over it and called it Coors Field, I'm sure those are two totally unrelated things that happened. https://t.co/0aGY5oym5O

I take zero joy in pointing out the errors of other reporters.

But when you show a stadium in Philadelphia instead of Coors Field for the @Rockies home opener, it might be because you’ve fired too many great journalists. pic.twitter.com/1L4G4AaUoE

"I can't believe the Denver Post put the wrong stadium on the cover of the paper on opening day…" [Remembers the last 5 years of decisions by the Denver Post] "I take back my last comment, I can absolutely see the Denver Post making that mistake." pic.twitter.com/HBvc6EvrNI

Tomorrow's Denver Post has a terrific guide to #theMasters pic.twitter.com/Jxx7RUdUd2

Check out my new @denverpost column on great places to drink near Wrigley Field. pic.twitter.com/18FGoAdHim

Great story about the state of Colorado in today’s @denverpost pic.twitter.com/Lr3kk6w2QX

I'm not sure if this photo of Coors Field in the @denverpost is all that accurate. Can someone let me know if it is? pic.twitter.com/8rNHWn4y5f

DENVER — As Colorado restaurants begin to reopen without capacity limitations, several owners are struggling to find enough staff to maintain a full house.

"Honestly I think the hardest part going forward is getting our staff back," Theresa Kane, owner of Blue Spruce Brewing Company said.