DENVER — A man who was shot and killed in a carjacking in Denver on Friday morning as part of a four-state crime spree has been identified.

David Rosenthal, 58, of Denver died from multiple gunshot wounds, the Denver Office of the Medical Examiner said. The manner of death was homicide.

On Tuesday, Uber confirmed that Rosenthal drove for the company and that he was using the app at the time of the shooting.

“We are shocked and heartbroken by this horrific crime, and our thoughts are with David’s family,” an Uber spokesman said. “We cooperated with police on the investigation and hope the individuals responsible are brought to justice.”

The carjacking by two happened at West Colfax Avenue and Perry Street, near Sloans Lake, about 1:50 a.m. Friday.

The black 2015 Cadillac was used two hours later in an armed robbery at a convenience story in Cheyenne, Wyoming. 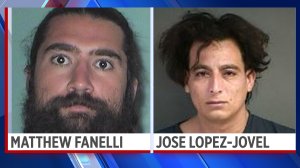 Matthew Fanelli, 30, of New mexico, was arrested Saturday in Oregon and is being held for investigation of first-degree murder in Rosenthal’s shooting, the Denver Police Department said.

Fanelli’s suspected accomplice, 31-year-old Jose Lopez-Jovel, was also arrested when officials said they tried to carjack a vehicle at a Red Robin restaurant in Roseburg, Oregon.

Fanelli is then to have allegedly fired gunshots at authorities during a chase. One shot hit a commercial vehicle and another hit an Oregon State Police vehicle.

He also allegedly shot at another vehicle with the bullet hitting an occupied child seat, Oregon State Police said.

After police lost sight of Fanelli, he allegedly tried to carjack another vehicle in a residential neighborhood, shooting a man and assaulting a woman during a robbery. The man was critically injured, Oregon State Police said.

Fanelli allegedly assaulted a female employee, who ran out of the building naked, the sheriff’s office said.

AURORA, Colo. (KDVR) — Marine Travis Mason was killed June 18, 2016 during a dispensary robbery in Aurora. He was working security at Green Heart dispensary at 19005 E. Quincy Ave. in Aurora when police say he was shot and killed. The two suspects have not been found.

“I really want justice so badly and I just kind of feel like it’s slipping away,” said his mother Priscilla Dominguez in an interview in November 2018. “If I was given the opportunity just to do one, go back and change one thing in my life, I would have been there that night to take the bullet for him so he could live his life. So he could see his kids grow up.”