DENVER — A well known Denver developer, who is often critical of Hancock on social media, is apologizing after an inappropriate tweet.

“Does it look like a mugshot or is it just me?” Zeppelin said on his social media account. 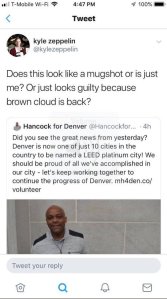 Zeppelin has since apologized saying it was “racially insensitive.”

Just reread my earlier tweet regarding @HancockforDen record on the environment and referencing a mugshot. While I stand on my record in the community on racial issues including multiple civil rights awards— It was racially insensitive and apologize to the Mayor

Zeppelin’s comments would perhaps not be newsworthy if it weren’t for the fact he has been a longtime supporter of one of Hancock’s top challengers Jamie Gillies. Financial data shows contributions to Gillies.

Here’s the case for 4 more years— he literally needs a job and to deliver for his cronies https://t.co/7dSWn7vpmw

More overhyped, ineffective policies by @MayorHancock. They raided our low cost art space GRACE and it took $300k and 2 years of process to keep it open for safe/high functioning situation. No other owner would put up with that. Add it up and artists are being pushed out https://t.co/Z6Iv4v3MNA

“It’s one thing to disagree on policy or politics. But it’s completely unacceptable to target the Mayor personally in such a hateful manner, particularly when we are seeing a rise in repugnant, racist and anti-Semitic crimes. These acts do not represent the inclusive Denver our Mayor, our City and our residents are proud of,” Marchetta said.

Ballots in the Denver Mayoral election go out next week. The election is May 7th.

KANSAS CITY, Mo. (AP) — More than $1.4 million had been raised as of Saturday for a man who spent 43 years behind bars before a judge overturned his conviction in a triple killing.

The Midwest Innocence Project set up the GoFundMe fundraiser as they fought for Kevin Strickland's release, noting that he wouldn't receive compensation from Missouri and would need help paying for basic living expenses. The state only allows wrongful imprisonment payments to people who were exonerated through DNA evidence, so the 62-year-old Strickland wouldn't qualify.