At 3:42 p.m. Monday, the Platte Canyon Fire Department said it was responding to the fire alongside other agencies, including the U.S. Forest Service.

The fire is located near Shawnee Peak in the Lost Creek Wilderness, southwest of Bailey. The area is part of the Pike National Forest.

PCFD said the fire is being called the Shawnee Peak Fire.

Smoke is visible from Bailey and other nearby communities. 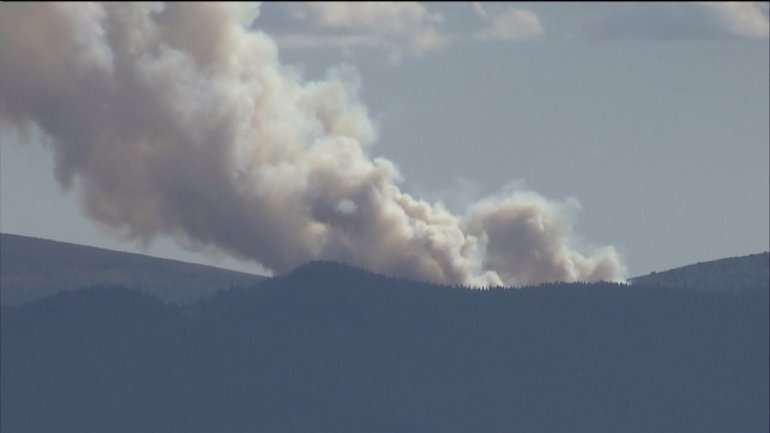 The fire is burning in an area that last had rainfall on Aug. 9, when about 1/3 of an inch fell. The area’s rainfall this August is 24% of normal, and 44% of normal for the summer, according to meteorologist Matt Makens.

Temperatures in the area have been running slightly over one degree warmer than average this summer.

As of Wednesday night, the fire had burned an estimated 37 acres — the same estimate from the days prior.

Ground and air resources are fighting the fire. A total of 159 people are involved, according to an update from the Forest Service.

On Thursday, officials shared an update, stating the fire is 40% contained. Firefighters have created a fireline east of the fire and south along the Craig Creek Trail.

Officials with the Pike and San Isabel National Forest say the fire will continue to burn on Friday as it moves through unburned fuels between the fire perimeter and constructed firelines.

On Monday morning, Park County officials sent out an update on the fire. It is now 60 percent contained. It has burned a total of 70 acres.

Officials also say the fire was caused by lightning.

No structures are at risk at this time.

DENVER (KDVR) -- Two wildlife conservative groups are launching a billboard campaign in the Denver metro area to draw awareness of a permit allowing the killing of Canada geese.

In Defense of Animals and Canada Geese Protection Colorado are responsible for the campaign. The groups say the U.S. Department of Agriculture (USDA) has a permit to roundup and slaughter Canada geese and goslings in the Denver metro area through Wildlife Services.

DENVER (KDVR) -- Local family and friends are heartbroken after the sudden loss of 18-year-old Wilber Portillo, who they said died with COVID-19 back in November.

DENVER (KDVR) -- Law enforcement officials in Denver are working behind the scenes to identify any potential threats ahead of multiple planned protests leading up to Inauguration Day.

There are reports of protests planned for Sunday at capitol buildings around the country. Saturday afternoon, the scene in front of the Colorado State Capitol was calm and quiet.

State capitols boarded up, fenced off, patrolled by troops

Biden to prioritize legal status for millions of immigrants

Betty White’s birthday celebration plan: ‘I can stay up as long as I want’

Thornton man identified as pedestrian struck, killed on I-25 near Dacono